Palestinian protests on the Gaza-Israel border have dropped off over the past two days, with Israel on Wednesday pointing to what it said were Egyptian efforts to restore calm after dozens of Palestinians were killed by Israeli gunfire, Reuters reports:

Israeli Intelligence Minister Israel Katz said an Egyptian intelligence chief, whom he did not name, warned [Hamas leader Ismail] Haniyeh that Cairo “knows and has proof” that Hamas was funding the protests and sending people to the border fence to serve “as living ammunition, women and children (see below) instead of shells and rockets”.

To really comprehend the unfolding events in Gaza, and to conceive of more effective and palatable responses, requires going well beyond a discussion of the tragedy and the changing tactics of Hamas in fomenting and channeling this protest, and Israel’s attempts to dissuade the Gazans from the confrontation and respond to its manifestations, according to Carnegie analyst Ariel (Eli) Levite and Jonathan (Yoni) Shimshoni, a research affiliate at the MIT Security Studies Program. 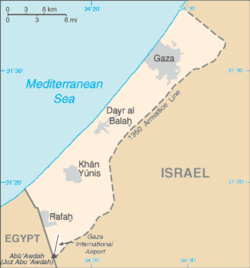 Hamas is engaged in a new variant of an old phenomenon: social warfare strategy. Importantly, this has become the most prevalent approach to warfare worldwide, a strategy commonly chosen by all challengers to the United States and its Western allies, from Hezbollah and the so-called Islamic State to Russia and China, they write for the Carnegie Endowment:

Those applying this strategy seek to prevail not through classical military confrontation with their militarily superior Western rivals—but rather by directly taking on adversarial societies, manipulating international public opinion, and mobilizing their own societies. Though particular tactics differ, all of these approaches channel conflict to occur among and between people, placing noncombatants on both the physical and psychological fronts. To succeed, they creatively subject to such societal logic the employment of a broad array of weapons—traditional (such as tanks and missiles) alongside newly weaponized ones. The latter include social networks, demographic transfers, digital currency, legal methods, and human shields (even corpses). Naturally, media coverage and the internet play a critical role in such campaigns.

The mass protests in Gaza, promoted by Hamas, were expected to peak on Tuesday with an effort by thousands of people to cross the fence, despite warnings from Israel, possibly setting the stage for more bloodshed, the New York Times reports. 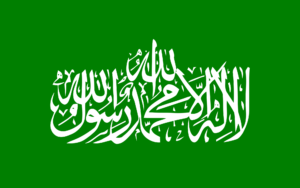 The protests are ostensibly organized by civil society groups but they have Hamas’s explicit support and a number of the dead have been members of the group’s armed wing. Organizers say the “Great March of Return” is financed by small donations and governed by a central committee of about 27 seats populated by representatives from some 18 political and civil society groups — including the dominant West Bank political party Fatah, as well as Hamas and Palestinian Islamic Jihad, both of which are recognized by the U.S. as terrorist organizations.

But the inclusion of violent jihadist groups suggests that the movement would best be described as representing “uncivil society,” according to one observer.

First, it is virtually out of options. The devastation in Gaza caused by the last full-blown war with Israel in 2014 was so extensive, with most of the damage still unrepaired, that it would be difficult to publicly explain to the group’s own constituents any choice to deliberately start another major conflict with Israel. The kind of scenario whereby Hamas has previously instigated or cooperated in the development of major armed battles with Israel would now be potentially politically disastrous in Gaza.

“In reality these demonstrations are far from peaceful, but are carefully planned and orchestrated tactical operations by a terrorist organization intending to break through the border of a sovereign state and commit mass murder in the communities beyond, using their own civilians as cover,” Col. Richard Kemp — a former commander of British forces in Afghanistan — remarked in a new report on Gaza by the independent High-Level Military Group (HLMG).

“Hamas’s use of actual smoke and mirrors to conceal its aggressive maneuvering on the Gaza border is the perfect metaphor for a strategy that has no viable military purpose but seeks to deceive the international community into criminalizing a democratic state defending its citizens,” Kemp added.

Every one of Hamas’s tactics has failed, and has produced only more misery in Gaza, notes Council on Foreign Relations analyst Elliott Abrams. Now what? The answer is at one level obvious: Hamas should stop throwing the people of Gaza into combat and stop attacking Israel, he adds:

It should concentrate on economic recovery for Gaza, negotiating for more open borders that permit imports of needed goods and export of people and products. Israel and Egypt should agree to such arrangements, so long as Hamas stops trying to import more weapons to prepare for future rounds of combat with Israel. Hamas should break its ties with Iran. It should permit the Palestinian Authority to resume its presence in Gaza.

This is a Hamas effort to weaponize what the Palestinians refer to as “Nabka” or the “Catastrophe,” when hundreds of thousands of Palestinians abandoned their homes during the 1948 war with Israel, says analyst Tom Rogan. But Hamas isn’t really interested in remembering history, it simply wants to force a confrontation between Palestinian civilians and Israeli soldiers guarding the border with Gaza.

Hamas has kept the pressure on Israel by at least telegraphing an embrace of nonviolence. For example, top leader Ismail Haniyeh recently spoke against the backdrop of posters of icons such as Nelson Mandela and Martin Luther King Jr. But Israel and Hamas’ main Palestinian rival, West Bank-based President Mahmoud Abbas, are skeptical because of the group’s refusal to disarm, the AP reports.

Its critics suspect the shift is opportunistic, and that Hamas can quickly revert to its violent ways.

Hamas “is changing its tactics, but it’s not changing its nature and strategies,” said Palestinian analyst Abdel Majed Sweilem.

Its critics suspect the shift is opportunistic, and that Hamas will quickly revert to its violent ways.

Hamas has never put the people of Gaza first. Hamas rejects Israel’s existence and treats all of the land as an Islamic trust. The Palestinian people are instruments in the struggle to reclaim it. For the struggle, for the cause, the people can be sacrificed, notes Dennis Ross, a former special assistant to President Barack Obama:

Why else would Hamas build tunnels to protect its weapons and its fighters but not its people during conflict with Israel? Why else, when Gazans desperately needed reconstruction, would its leaders divert short supplies of cement, electric wiring, and iron away from badly needed housing construction to build the tunnels? Why else would it store, deploy, and fire its rockets in or next to schools, mosques, and hospitals? In conflicts with Israel, Hamas seeks to maximize Palestinian civilian casualties—preferably women and children. That brings international opprobrium on Israel and makes it harder to engage in its self-defense.

The leadership and institutions of the Palestinian Authority have demonstrated over the years an aptitude for democracy and a willingness to help spread awareness of its importance, according to Riad Malki (left), director general of PANORAMA, the Palestinian Center for the Dissemination of Democracy and Community Development (now the PA’s foreign minister). Israeli democracy too has played a role—albeit an indirect, unintentional one—by giving Palestinians a nearby model to study, he wrote for the National Endowment for Democracy’s Journal of Democracy in 2006.

But the PA’s democratic legitimacy has corroded since, observers suggest.

“The Palestinian national movement has moved beyond crisis to the point of bankruptcy,” said Ghassan Khatib, a former PA cabinet minister  and now a lecturer at Bir Zeit University, near Ramallah. “Neither the armed resistance of Hamas nor the diplomacy of Fatah has made any gains,” he told Al Jazeera. “They are failed governments, and the public is deeply dissatisfied.”

“Neither Fatah nor Hamas are in a position to advance popular struggle. They are bureaucratic governments, with structures, leaders and ideologies that militate against non-violence as a tactic.”

Conflict in the 21st century is largely defined by foes that are sub-state, asymmetric and Islamist-jihadist, says analyst Yaakov Lappin.

Asymmetrical warfare is a conflict between two sides whose relative military power or whose strategy and tactics differ significantly. Examples can be seen in recent confrontations between Israel and terrorist groups, where this approach was used to circumvent the IDF’s technological and military superiority, notes Sima Vaknin-Gill, director-general of Israel’s Strategic Affairs and Public Diplomacy Ministry:

At the same time, Israel’s enemies exploited their own weakness and the limitations imposed on the stronger side, in this case the IDF. They did so by conducting media warfare aimed at depriving the IDF of the legitimacy to operate at its full potential in its quest to protect Israel and its citizens. Media and consciousness manipulations, based on the underlying sympathy extended to an underdog, significantly shortened the political timetables available for the IDF to operate.

The various manifestations of the delegitimization campaign reveal that Israel’s opponents have chosen to completely abandon direct confrontation, whether on the military battlefield or in the political arena, Vaknin-Gill adds. Instead they transferred their whole modus operandi, while adapting tools and tactics developed for the physical battlefield, to their comfort zone – the cognitive arena.

The Islamic Republic of Iran is reportedly funding Hamas and supporting its purported strategic shift.

In a Tehran Friday sermon, Ayatollah Ahmad Khatami, a member of the Iranian Assembly of Experts, threatened to “turn Tel Aviv and Haifa to rubble,” according to MEMRI TV. 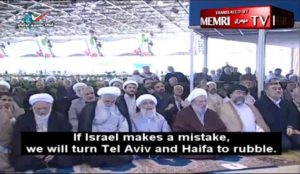 Democracies need to respond by undermining Iranian asymmetric activities in the Middle East and elsewhere by publicizing them and using their exposure to embarrass and isolate Iran, said the October 2017 Carnegie report, Contain, Enforce, and Engage: An Integrated U.S. Strategy to Address Iran’s Nuclear and Regional Challenges.

For the Hamas leadership, with popular dissatisfaction growing, the only thing to be done was divert attention to Israel and, thereby, pressure Abbas, who cannot appear indifferent to Palestinians being killed by Israelis, Ross writes for the Washington Institute for Near East Policy. As one European diplomat told me, Hamas leaders acknowledge privately that Abbas is the source of their current difficulties, but shifting the focus to Israel is a proven, if cynical, tactic.