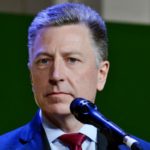 A former U.S. diplomat says he has never seen Georgia so politically divided and warns that the country could retreat from the democratic progress it has made, Todd Prince, a senior correspondent for RFE/RL, reports.

“There is a risk of backsliding. The presidential elections that took place last year were deeply flawed,” Kurt Volker, who served as U.S. ambassador to NATO during the Russian-Georgian War in August 2008, told a conference in Washington, D.C. on September 23. “I think it is the most divided I have seen that country,” said Volker, who just returned from a trip to the Georgian capital, Tbilisi.

“It is really concerning when you have a country with such important external challenges, such important aspirations and the need for friends and support and engagement. It is hard for outsiders to do that when they are so divided internally,” he told the forum, organized by the Center for European Policy Analysis. Volker, now the executive director of the McCain Institute, is currently serving as the U.S. special envoy to Ukraine on a volunteer basis, Prince adds.

No political party is supported by more than a fifth of citizens, according to a poll conducted by the National Democratic Institute, in partnership with the Caucasus Research Resource Center (CRRC), released on September 20. Georgian Dream secured 19 percent while the United National Movement, the leading opposition force, received 9 percent. Some six in 10 citizens are undecided 12 months before the October 2020 parliamentary polls.

Georgians are increasingly anxious about the political situation, according to the results of the poll, NDI adds: