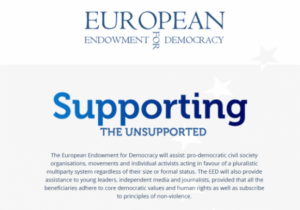 European leaders like to claim they care about democracy. But too often, their policies ignore it — damaging Europe’s own interests in the process, argue AEI analysts Dalibor Rohac and Ivana Stradner. Democracy and the rule of law are necessities, not idealistic luxuries. In fact, Brussels’s ongoing standoff with Hungary and Poland brings the question dangerously close to home, they write for the Washington Post:

The E.U.’s collective approach offers plenty of carrots but almost no sticks. The European Parliament has repeatedly called for member states to adopt an E.U.-wide Magnitsky Act, giving the bloc new tools to impose sanctions on dictators and kleptocrats — to little avail. But between 2013 and 2017, more than 80 percent of all E.U. development aid was directed to countries that are authoritarian or hybrid regimes. ….The European Endowment for Democracy, set up in 2013 as a counterpart to America’s National Endowment for Democracy (NED), continues to operate with a puny annual budget of 19 million euros, which it spends on a diffuse array of programs on women’s political participation, gender identity and sexual orientation, and the arts — ultimately diluting the original purpose of defending democracy, narrowly understood.

The E.U. faces a choice. Either its current drift continues, allowing autocracies in Europe’s neighborhood to flourish, or Brussels gets serious about defending and promoting liberal democracy, human rights and rule of law, Rohac and Stradner suggest. Walking the walk requires Europeans to match their verbal support for democracy with resources and determination. RTWT

Similarly, in Latin America, where democracy is on the ropes, what’s needed is a new approach that tackles the current health and migration crises, transforms the traditional U.S. promotion of democracy, security and trade, and incorporates Latin American nations into the broader global foreign policy agenda, according to Shannon O’Neil, a senior fellow for Latin America Studies at the Council on Foreign Relations in New York:

Freedom House estimates that in each of the last four years, Latin nations curtailed press freedoms, restricted civil society organizations and abused human rights. …Worse, the public’s faith in democracy’s promise has frayed. According to the non-profit polling group Latinobarometro, less than half of Latin Americans now believe democracy is the best form of government (down nearly 10 percentage points since 2015). Few feel good about their court systems, and in Brazil, El Salvador and Peru less than one out of 10 citizens approve of their legislatures and political parties.

The new administration in Washington “should come out of the gates with plans to shore up a values-based foreign policy,” O’Neill writes for Bloomberg. “Programs will have to return to basics, helping to rebuild a scaffolding of government, civil society and the investigatory press to restore the ground lost in recent years.”

How can the US and other leading democracies coordinate a strategic response to the China challenge? @NEDemocracy President Carl Gershman offers remarks. https://t.co/Ed7GLv9uKP via @AtlanticCouncil