In the face of an autocratic resurgence, a “grand strategy of democratic solidarity may show the way” to maintaining core elements of the liberal international order, the Munich Security Conference asserts.

Despite a lot of angst about the future of democracy, Munich Security Index data shows that people still believe that democracies are better able to solve the problems of the future than undemocratic countries, it adds in Turning the Tide – Unlearning Helplessness, the latest Munich Security Report. 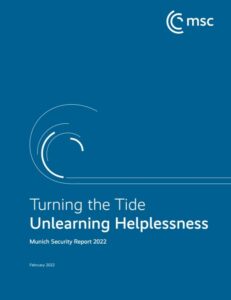 The current Ukraine crisis arises because the Kremlin views the post-Cold War international order as dangerously one-sided, which it is now trying to revise through military threats, said Thomas Graham, who served as senior director for Russia on President George W. Bush’s National Security Council.

“The current crisis is really much broader than Ukraine,” he tells The New York Times, “Ukraine is a leverage point but it is more about Poland, Romania and the Baltics. The Russians think it is time to revise the post-Cold War settlement in Europe in their favor.”

At the ideological level, both China and Russia are authoritarian states that are trying to prevent the spread of liberal ideas of democracy and human rights, both at the domestic and international levels, notes one observer. In fact, this can be seen as a continuum, with the spread of liberal ideas globally potentially negatively affecting the elites of both countries.

With advanced democracies backsliding, can we count on the public to save them? the Niskanen Center asks. Democratic principles may be widely shared, but that does not mean citizens respond as we might hope. Christopher Claassen finds that publics around the world react against advances in liberal democracy by becoming less favorable toward democracy but become more supportive of democracy when it declines. 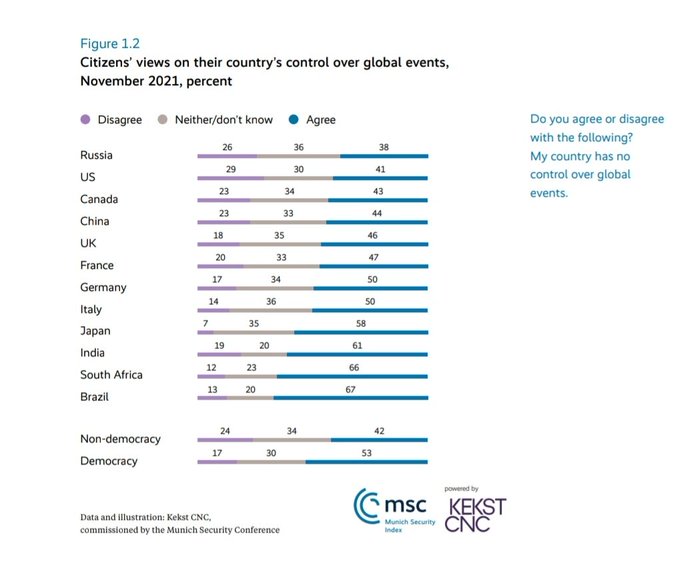 But most citizens – even in the major powers – think that their country has no control over global events, resulting in a sense of “collective helplessness” (above), the report adds. 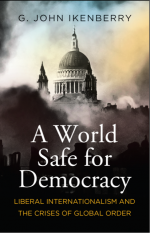 Populist politicians and emboldened illiberal powers are attacking the liberal international order shaped largely by the transatlantic democracies, the authors add.  Yet, despite the autocratic resurgence, the “combined power of the world’s liberal democracies is still unmatched,” the MSC observes.

Creating an international “space” for liberal democracy, preserving rights and protections within and between countries, and balancing conflicting values such as liberty and equality, openness and social solidarity, and sovereignty and interdependence—these are the guiding aims that have propelled liberal internationalism through the upheavals of the past two centuries, Princeton’s John Ikenberry argues in A World Safe for Democracy.

In a 21st century marked by rising economic and security interdependence, liberal internationalism—reformed and reimagined—remains the most viable project to protect liberal democracy, he told an event co-sponsored by the UVA Democratic Statecraft Lab (above).