Over the last few years, a crisis of legitimacy has beset the liberal international order. In the context of global reassessment, the configuration of regional orders has come into question, illustrated by the current collapse in the Middle East, notes a new Atlantic Council report. The idea of a ‘Russian resurgence’ in the Middle East set against a perceived American withdrawal has captured the attention of policymakers and scholars alike, warranting further examination, according to The MENA Region: A Great Power Competition, edited by Karim Mezran and Arturo Varvelli.

The US commitment to the status quo in the Middle East was so resolute that American efforts to promote democracy, human rights, and religious tolerance in the region were especially modest, even in comparison with efforts in other regions of the world with similarly authoritarian traditions. They were therefore ineffectual, writes William F. Wechsler, Director for Middle East Programs at the Atlantic Council and Director of the Rafik Hariri Center for the Middle East: 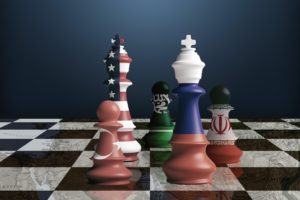 In this area American agency was certainly limited but its political will was even more lacking. The United States’ historical reluctance, compounded over decades, to quietly encourage its Middle Eastern partners to adopt goals for even gradual change or to take even largely symbolic reforms was deeply unfortunate. This repeated failure by the United States to apply its own preferred mix of idealism and realism by persuading its regional partners to act in their own enlightened self-interest helped allow the conditions for continued domestic unrest.

Russia and China have enhanced their presence and strategic leverage in the region, the report suggests.

Moscow has emphasized that while Russia supports all existing governments in the region, US support for democratization and human rights (whether through military intervention or otherwise) has not advanced either of these goals, but has instead needlessly undermined existing governments and allowed jihadists to become stronger, writes Mark N. Katz, a Professor of government and politics at the George Mason University Schar School of Policy and Government. 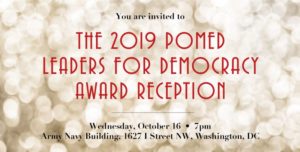 This idea reflects the overall mental framework of contemporary Russian leaders, who believe that the real borderline in global politics today divides not democracy and authoritarianism, but order and chaos, adds Andrey Kortunov, the Director General of the Russian International Affairs Council.

Autocratic actors are also taking advantage of the apparent dysfunctionalities of the democratic West, the contributors contend.

“An economically successful and technologically advanced China is perceived by
many in the region to represent an increasingly attractive alternative model to the troubled American one,” Wechsler observes. “Moreover, it can offer nondemocratic governments in the region economic advantages without any governance or human rights conditions.”

The Project on Middle East Democracy* will honor an outstanding group of award recipients (see below) who exemplify democratic principles. An October 16 reception will recognize seven distinguished individuals who have made exceptional efforts to challenge the authoritarian status quo and stand up for democratic values through human rights promotion and civic engagement, advancing the rule of law, leadership in government, and literature and the arts, POMED writes. Wed, Oct 16th 2019 at 7:00 PM EDT. RSVP

MENA’s undemocratic leaders have long claimed that the American model of governance was not appropriate for their societies, but they have nevertheless long recognized the benefits that the United States accrues from it. Today, however, what they observe is that democratic systems in the West, including the current system in Washington, often lead to paralysis and polarization, Wechsler adds:

Long-term thinking has given way to short-term, zero-sum politics, driving unpredictability and precluding any ability to plan for the future. Difficult decisions of governance become impossible, national budgets get tighter, and government’s promises remain unmet. Elections are seen as drivers of domestic instability rather than societal consensus. The free flow of information is weaponized to pit one group against another. This is not a system that many regional leaders want to emulate, especially when they believe that in their environment representative systems risk empowering religious extremists. RTWT