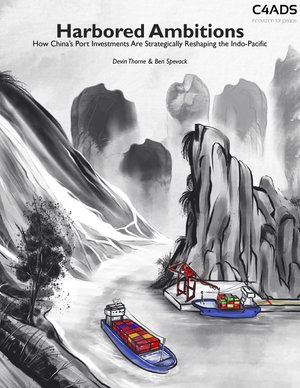 A massive Chinese infrastructure program that Beijing says is aimed at promoting global trade and economic growth is actually intended to expand the country’s political influence and military presence, according to a report issued Tuesday. The report by the U.S.-based research group C4ADS questions China’s portrayal of the trillion-dollar program, called the “Belt and Road Initiative” [aka BRI] as strictly meant to promote economic development, AP reports:

“Rather, the investments appear to generate political influence, stealthily expand China’s military presence and create an advantageous strategic environment in the region,” the report added.

Beijing’s acquisition of more than a dozen ports across the Indian Ocean is a state-directed effort to bolster Chinese political influence and extend its military reach from Indonesia to East Africa, according to a detailed new study released today, Foreign Policy adds.

The mainstream development world, for years hamstrung by having to talk around politics and power, seems especially ill equipped to address the link between China’s authoritarian system at home and its vision of a “community of common destiny” abroad, she writes for the Journal of Democracy:

This judgment may appear harsh to development practitioners, but yesterday’s Party is not today’s Party. China under Xi Jinping is both more authoritarian and more global, while the liberal international order and the democratic norms that it underpins are in disarray. This will affect the field of development assistance in more overt and enduring ways—the question is not if, but when.