The US and other Western democracies “are getting increasingly uneasy about China’s political development and the nature of Chinese influence abroad. Ideology once again defines the terms of the US-China relationship,” analyst Cary Huang writes for the South China Morning Post:

Washington sees China’s recent developments as a major political setback in the one-party authoritarian state, as Beijing began to embrace some elements of orthodox Leninist-Stalinist philosophy and Maoist politics. This is seen in its intensified crackdown on dissent, its suppression of freedom, more draconian censorship on the internet and social media, and tighter social control in recent years.

“China is also promoting its development model as a substitute to the Western model,” Huang adds. “With its success in lifting masses of people out of poverty faster than any other society in history, the Chinese development model is being touted as a new option for other countries.”

For the first time, China is an illiberal state seeking leadership in a liberal world order, according to Elizabeth C. Economy, Director for Asia Studies at the Council on Foreign Relations and the author of The Third Revolution: Xi Jinping and the New Chinese State (Oxford University Press, 2018). Many observers view Xi as an economic reformer who has been thwarted by powerful opposition, as the best hope for positive global leadership, as overwhelmingly popular among the Chinese people, and as committed to stability abroad in order to focus on affairs at home. In fact, such assessments miss four fundamental truths about him, she writes for Foreign Affairs: 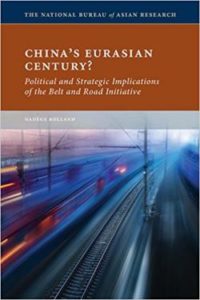 In her book, China’s Eurasian Century? (left), analyst Nadège Rolland speculates that Xi’s long-term vision [embodied in the Belt and Road Initiative] is to create a world order in which Western-style rule of law and democracy promotion are replaced by deference to Chinese interests and the international application of Chinese “stability maintenance” techniques, Columbia University’s Andrew Nathan* writes for Foreign Affairs [*a board member of the National Endowment for Democracy, the Washington-based democracy assistance group].

China is using its Belt and Road Initiative (BRI) infrastructure fund specifically to promote a system of values different from the West’s, said German Foreign Minister Sigmar Gabriel. Beijing was ‘constantly trying to test and undermine the unity of the European Union’ through a policy of ‘sticks and carrots,’ he added.

Beijing’s sharp power shouldn’t be conflated with ‘soft power with Chinese characteristics,’ argue analysts Bates Gill and Benjamin Schreer, professors in the Department of Security Studies and Criminology at Macquarie University. Instead, it’s a vital instrument to fulfil President Xi Jinping’s ambition for China to become a global power by piercing, penetrating or perforating the political and information environments in target countries, they write for the Strategist:

Australia….is far from the outlier in responding to China’s sharp power. Instead, its efforts are part of an emerging trend around the world to push back against Chinese influence activities. Sensibly, Canberra’s steps to tighten the rules on Chinese investments and to defend Australia’s way of life are based on the understanding that Beijing’s sharp power is likely to intensify and, left unchecked, could trigger a major ideological confrontation with the West and others.

How should Western democracies handle their relations with large, commercially important but ever more authoritarian governments in their vicinity? asks Daniel Woker, a Senior Lecturer at the University of St Gallen. Are all Chinese entitled to the proverbial “fair go”, or is the Chinese Communist Party, with its great enabler Xi, so invested in institutions, such as the Confucius Institute, that we should see them as foreign agents? he writes for the Lowy Institute:

Looking at the economic stakes, these are questions that must preoccupy not only think tanks and the media but also most other decisive actors in both Australia and Europe. Especially now when both China and Russia are becoming ever more authoritarian, guided by a “China Dream” and post-Soviet revanchism to rectify perceived historic wrongs.

Like China’s development policy and economic assistance programs, Beijing’s diplomacy “figures as a useful instrument for a revisionist power to further its geopolitical ambitions,” notes analyst Tanoubi Ngangom. Consequently, the conventional categorisation of development diplomacy within soft power no longer holds. Considering this, then, she writes for the Observer Research Foundation:

Beijing’s struggles with multiculturalism and race issues will hinder its soft power overseas, argues analyst Andrew McCormick. China’s televised Lunar New Year gala’s controversial depiction of African life elicited widespread allegations of racism, with many adding that this was not the first time lately China had offended along racial lines, he writes for the Diplomat:

Boasting a world-class military and an economy on track to surpass that of the United States by 2030, there is little doubt that China will soon assume the mantle of a global superpower. But in a world where many see racial and cultural pluralism as sources of strength for the West in recent decades — and where global media culture has become broadly rooted in the politics of inclusion — experts say blunders like the gala’s may undercut China’s soft power efforts abroad and limit the cultural influence the nation is able to achieve on the world stage.