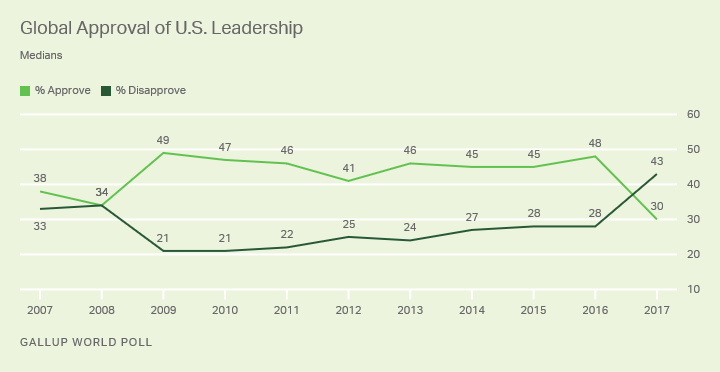 Global confidence in US leadership has fallen to a new low, according to a Gallup poll conducted across 134 countries, CNN reports:

The US rating is down nearly 20 points from the 48% approval rating in the last year of President Barack Obama’s administration, Gallup said. It’s also four points lower than the previous low of 34%, seen in the final year of George W. Bush’s presidency.

The losses in U.S. leadership approval may have implications on U.S. influence abroad, Gallup adds:

With its stable approval rating of 41%, Germany has replaced the U.S. as the top-rated global power in the world. The U.S. is now on nearly even footing with China (31%) and barely more popular than Russia (27%) — two countries that Trump sees as rivals seeking to “challenge American influence, values and wealth.”

The diminished moral authority of the United States is likely to adversely affect its credibility in promoting democracy, observers suggest.

“This year marks a significant change in our trends,” said Jon Clifton, global managing partner at Gallup. “Only 30% of the world, on average, approves of the job performance of the US’s leadership, down from 48% in 2016.”

“In fact, more people now disapprove of US leadership than approve. This historic low puts the US’s leadership approval rating on par with China’s and sets a new bar for disapproval.”