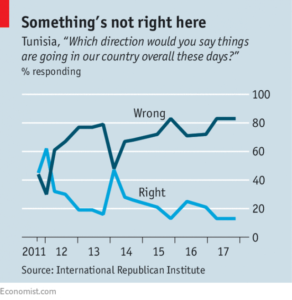 Seven years after the revolution, many Tunisians are losing faith in a democratic transition that was meant to bring wider prosperity, The Economist notes:

A poll by the International Republican Institute, an American pro-democracy group [affiliated with the National Endowment for Democracy], found that most Tunisians think the country is going in the wrong direction (see chart). Asked whether prosperity or democracy was more important, almost two-thirds chose the former. RTWT

But Tunisia’s democratic experiment remains a significant accomplishment considering the surrounding environment and the dashed experiences in the region, notes Dr H A Hellyer, a senior non-resident fellow at the Atlantic Council in Washington, DC and the Royal United Services Institute in London:

Tunisia has succeeded in constructing a consensus-based constitution that would be the envy of not only many more Arabs in north Africa, but people all around the world…. is not a consolidated transition to a truly well entrenched order, underpinned by accountability, the rule of law, and fundamental rights. Tunisia may be far closer to that than it was in 2010 – but it still needs help. It still needs assistance from its regional neighbours, and beyond. It’s not a charitable donation when that assistance comes, it’s an investment in a more stable region.