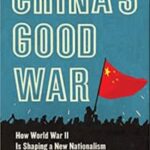 Realistically, the chances of Hong Kong returning to the freedom and openness that it enjoyed for 23 years after the handover are minimal, writes Oxford University’s Rana Mitter, the author of “China’s Good War: How World War II is Shaping a New Nationalism” (Harvard). The question is whether those who uphold liberal values—politicians, judges, journalists, academics—can find ways to preserve what is left, or whether Hong Kong’s freedoms should be given up as lost. An existential crisis is looming.

The island’s liberals have not always been their own best allies, he writes in a must-read essay for Prospect:

For a brief period in the summer of 2019, it looked as if dialogue might be possible. Yet the seeds of the democrats’ downfall may have lain in the slogan of the protesters: “Five demands, not one less” (these included not only targeted issues such as an inquiry into police brutality but also a wide-ranging commitment to universal suffrage). Staggering their demands might have led to more success. Of course, there is no equivalence between a city government with the might of an authoritarian, highly-armed state behind it and a protest movement that mostly used non-violent tactics. Yet the democrats may have missed a chance to take “Yes” for an answer—even if it was a very hesitant yes.

Hong Kong Crackdown Is an Early Test for Biden https://t.co/zcLD5pIkfC