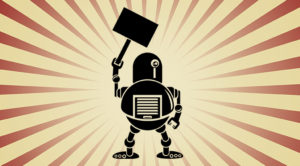 If Russian attacks on social media are combined with AI technology, information attacks could become precision-guided, notes Chase Johnson, Research Associate at Boise State University’s School of Public Service.  Nefarious actors could gather the comprehensive profiles that surveillance capitalism has compiled over the years. Fake news would then no longer speak to issues but to individuals, appealing to what makes the user change their mind, he writes for The Conversation:

From my time researching the ways Russia uses these platforms to threaten democracy, I am familiar with the worst-case scenarios of big tech’s capabilities. Because platforms’ success is predicated on making information go viral, the most successful content can also be some of the most divisive. Russia believes that by disseminating enough false information about the most inflammatory areas of American politics, it can sow chaos in the system. Big tech is the perfect port of entry for such campaigns.

“If a monopolistic tech company decided to fully embrace its capacity to spy on its users and leverage that data to a personal or political end,” Johnson adds, “the consequences for democracy could be catastrophic.” RTWT