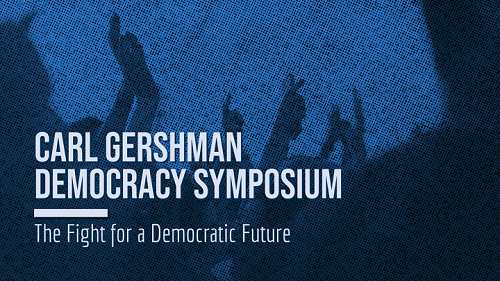 How on earth do you get a U.S. Senator, a French philosopher, a Polish minister of foreign affairs, a Canadian ex-prime minister, and a Central European prince to read out the names of several hundred detained Belarusian activists on radio – during the holiday season? You have Carl Gershman do it, says Alexander Lukashuk, director of Radio Free Europe/Radio Liberty’s Belarus service.

The name of former President George W. Bush popped up in mid-afternoon: When Bush was in office, he had welcomed a group of Belarusian dissidents to the White House. I had mentioned the idea to Carl but didn’t really think it was possible; it was just wishful thinking. Carl, however, didn’t do wishful thinking. A couple of hours later, he sent me an email he’d just received from Condoleezza Rice, who had been Bush’s secretary of state: “President Bush has agreed to do this. His chief of staff Mike Meece will be in touch.” Carl added one word of his own: “Bingo.” I answered, brilliantly, “Jesus.” Puzzled, he emailed, “What does ‘Jesus’ mean?” I gave the only possible answer: “Someone who can make miracles.”

“Voices of Solidarity” was on air all New Year’s night, repeated again and again and again, Lukashuk adds. It was heard by the prisoners themselves, some equipped with short-wave radios in their jail cells; their families, colleagues, and friends listening at home. The response among listeners in Belarus was enormous. The program gave that strangest of gifts that humans can share beyond time and distance—hope. RTWT

To honor Carl Gershman’s service, the NED hosts a symposium above that will engage leading thinkers on how to confront challenges to democracy as well as frontline activists who will share with us their insights from the day-to-day struggle for freedom. September 21, 2021 – 10:00 am – 12:00 pm. RSVP