The coronavirus pandemic that rages across the globe is a fire China helped light. The Chinese government spent weeks denying and downplaying the severity of its growing coronavirus outbreak – obfuscation cost nations crucial time in preparing for and potentially curbing the damage of Covid-19, Vox reports:

Some experts Vox spoke with believe President Xi Jinping’s regime should be held accountable for the more than 3 million infections and 200,000 deaths that have taken place worldwide. But China isn’t letting the crisis go to waste. Instead of looking to make amends, Beijing is taking advantage of the chaos to pursue its long-term foreign policy goals more aggressively…..China has launched a global disinformation campaign to deflect blame for the virus onto other countries — for instance, alleging the virus really originated in the US, or maybe in Italy. It also sent needed medical equipment and doctors to heavily impacted countries where it seeks to expand its influence, allowing Beijing to play the hero of the pandemic instead of the villain.

“When it sees opportunities, China moves to exploit them,” said Bonnie Glaser, director of the China Power Project at the Center for Strategic and International Studies think tank in Washington, DC. “And we are in a moment where the Chinese definitely see opportunities.”

China and Russia are exerting influence in the realm of ideas, said Christopher Walker, Vice President for Studies and Analysis at the National Endowment for Democracy (NED).

Looking at media and universities and think tanks what we found was that in many instances the effects of this engagement did not seek to encourage pluralism or meaningful competitive debate, but instead it sought to side-line systematically certain issues, to sow confusion or to cloud the debate or to systematically push the state policy line of authoritarian power, he told Visegrad Insight. CGTN (China Global Television Network), RT (Russia Today) or Sputnik were and currently are active players in these pursuits.

On Sunday, Andrew Adonis, a member of Britain’s House of Lords and onetime cabinet minister, took aim at the idea that the coronavirus pandemic was causing a crisis of capitalism, CNN reports.

“Lots of instant commentary on ‘how Covid-19 will change the world’ calls it a ‘crisis of capitalism’. Wrong,” he wrote on Twitter. “It’s a ‘crisis of communism‘. It became a global pandemic through Xi’s communist regime China.”

But German Foreign Minister Heiko Maas said the virus had exposed problems at the heart of both the Chinese and US models. Asked which was being proven superior, Maas said “neither.” “China has taken some very authoritarian measures, while in the US, the virus was played down for a long time,” he told Der Spiegel. “There are two extremes, neither of which can be a model for Europe.”

An increase in racist propaganda within China this appears to have stemmed from the Chinese Communist Party (CCP) putting forth “many contradictory stories” about the origins of coronavirus, including alleging that the U.S. Army and Italy were the true sources, and not Wuhan, where the outbreak is believed to have begun, ABC News reports.

“There is longstanding and well-documented racism, especially against black people, in China,” said Dr. Matthew Kroenig, associate professor at the School of Foreign Service at Georgetown University. “The state has seized on this sentiment in recent days to find a scapegoat.”

“Most CCP actions are driven by its two foremost goals of domestic stability and increased international leadership,” added Kroenig, author of The Return of Great Power Rivalry. “Similarly, China’s disinformation campaign is driven by a desire to deflect blame, so the regime can appear competent both at home and abroad.”

China’s handling of the outbreak can be compared to the Soviet Union’s effort at cover-up after the nuclear accident at Chernobyl in 1986. It gets too big even for propaganda to cover all the unanswered questions, adds Jonas Parello-Plesner, a Visiting Fellow with the GMF Asia Program.

Let’s use the energy in the world’s democracies to work for an independent inquiry. Let’s use the occasion to do a necessary health check of our medical supply lines among democratic allies in NATO and beyond, he suggests.

Beijing’s sharp power offensive is in line with its strategic objectives, says Andrew Erickson, an expert on China at the US Naval War College.

“To the extent that any nation has a grand strategy, China surely does. The vision is no secret: Xi Jinping vows to make China great again,” he wrote for War on the Rocks in October 2019. “Xi’s strategy for a modern China of unprecedented power and influence requires recapturing lost glories at home and abroad.” 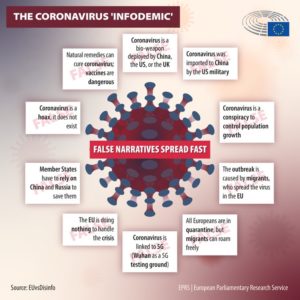 A virus without respect for borders has forced the world’s people to simultaneously reckon with threats to government accountability, press freedom, and the vitality of public discourse, notes Dean Jackson, a program officer for the National Endowment for Democracy’s International Forum for Democratic Studies.

Societies cannot understand these trends solely through the narrow lens of their own local political contexts. Doing so would mean failing to engage in important debates about democracy and the broader information space—which will surely have implications for future pandemics and other transnational crises to come. @DWJ88.