The quality of democracy, market economy and governance reached its lowest level since 2004 when the Bertelsmann Stiftung’s Transformation Index (BTI) was first published, it reported today.

Limits on freedom of expression, curbs on independent media and disempowered constitutional courts – common characteristics of autocracies – are now also features of an increasing number of democracies, the study suggests.

Clientelism, unwillingness to compromise and political actors’ inability to address voters’ concerns and grievances are the root causes of the destabilization of established political orders, BTI contends.

“The majority of governments fail to find answers to the problem of economic and social exclusion of broad sections of the population. Poverty and inequality are widespread in 76 of 137 countries, including 46 of 50 African countries,” the authors observe. “In view of rudimentary health systems and precarious living conditions, the weakest members of these societies are particularly vulnerable to the devastating effects of the current pandemic.” 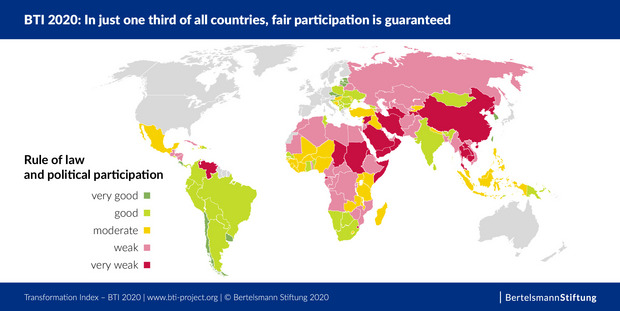 The decline in global average democratic ratings “are essentially the result of weaker democracies and more repressive autocracies,” the study states.

“Nationalism and nepotism are not new, but they have become acceptable worldwide. Even former democratic frontrunners who, like Poland or Hungary, are located in the heart of Europe are now showing alarming setbacks when it comes to the rule of law and the quality of democracy,” said Brigitte Mohn, a member of Bertelsmann Stiftung’s Executive Board.

But the survey does offer glimmers of hope against the authoritarian trend.

The increase in autocratic repression and democratic deficiencies is not irreversible, notes BTI’s Dr. Hauke Hartmann. In Ecuador, an increasingly authoritarian regime was overcome, and democratization processes began in unexpected places such as Armenia and Malaysia. There were also rays of hope against the authoritarian trend in Ethiopia and – after the end of the BTI assessment period – also in Algeria or Sudan.

The results of the BTI 2020 underline that positive impulses for transformation currently come far less frequently from governments than from critical civil societies that are resisting the dismantling of democratic standards, he adds.