Journalists and independent media are the canary in the coal mine when it comes to identifying the early signs of democratic regression, observers suggest.

This is how democracy dies in the 21st century: in a musty courtroom, with a judge invoking Nelson Mandela, saying, “To be free is not merely to cast off one’s chains but to live in a way that respects and enhances the freedom of others,” The Atlantic’s Sheila Coronel writes.

There are no power grabs in the dead of night, no tanks rolling down the streets, no uniformed officers taking over TV stations. Just the steady drip, drip, drip of the erosion of democratic norms, the corruption of institutions, and the cowardly compromises of decision makers in courts and congresses, she adds, citing the conviction of Philippine journalist Maria Ressa.

Authorities in Djibouti should stop harassing journalists working with the La Voix de Djibouti (see above) broadcaster, and ensure that the press can cover matters of public interest without intimidation, said the Committee to Protect Journalists.

On June 5, police in the southern city of Ali Sabieh arrested Kassim Nour Abar, a reporter with the Paris-based privately owned radio station and news website, while he was preparing to cover protests in the city, according to his lawyer, Zakaria Abdillahi, who spoke to CPJ over the phone, CPJ adds:

On June 7, police in Djibouti City arrested Mohamed Ibrahim Waiss, another La Voix de Djibouti reporter who also works as a correspondent for the press freedom group Reporters Without Borders, while he was reporting on the protests, according to Zakaria and reports from the broadcaster and the press freedom group… La Voix de Djibouti – a partner of the National Endowment for Democracy (NED) – was founded by Daher Ahmed Farah, the leader of the opposition Movement for Democratic Renewal party, and is known for its criticism of Djibouti’s government, according to CPJ research. …… 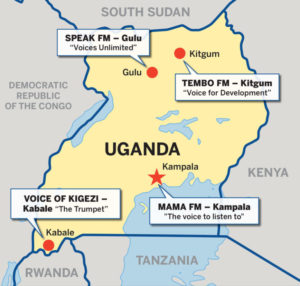 Despite the explosion of digital news outlets globally, millions of people in sub-Saharan Africa continue to rely on radio as the most accessible independent news source, say analysts Mary Myers and Nicola Harford. However, radio stations across continent are facing unprecedented threats to their sustainability due to weak media markets, limited advertising revenue and intense competition. A more pragmatic understanding of viability and more flexible donor strategies can help these outlets stay on air and maintain their independence, they write in Local Radio Stations in Africa: Sustainability or Pragmatic Viability?, a new report for the NED’s Center for International Media Assistance:

– Station managers must continually balance editorial independence, financial sustainability, and their mission to serve the public. Addressing these three challenges is not always compatible, and trade-offs are often inevitable.
– Successful stations are able to harness viable funding modalities without selling out and capitalize on management and operations techniques to expand reach
without compromising quality content.
– Marginal improvements in the flexibility of media donors and the media assistance community can foster greater viability and independence for small outlets in challenging context. 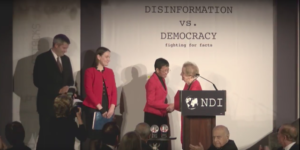 Facing a barrage of legal attacks, renowned journalist and digital news pioneer Maria Ressa (right), says the Philippines is on the verge of experiencing the death of democracy by “a thousand cuts,” Erin Stock writes for IJNET:

In an online event co-hosted by ICFJ and FRONTLINE, she said her country, once known for its vibrant news media, is now teetering on the brink of a “precipice.” Ressa, the executive editor and founder of Rappler, the award winning Manila-based news outlet, joined the online panel less than two days before she was found guilty Monday of a criminal cyber-libel charge by a Manila court.

It is encouraging to see governments, technology firms, and civil society actors in a growing number of countries exploring avenues for protecting media freedom, increasing transparency, and countering disinformation efforts by Chinese government­–linked actors. Their efforts will not only address Beijing’s encroachments, but also strengthen democratic institutions and independent media against other domestic and international threats. 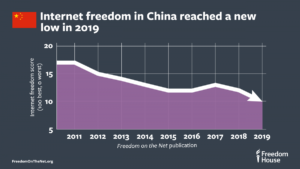 China’s campaign to control narratives through media influence operations is attracting attention — and opposition, notes Sarah Cook, a Senior Research Analyst at Freedom House and director of its China Media Bulletin. It is encouraging to see governments, technology firms, and civil society actors in a growing number of countries exploring avenues for protecting media freedom, increasing transparency, and countering disinformation efforts by Chinese government­–linked actors. Their efforts will not only address Beijing’s encroachments, but also strengthen democratic institutions and independent media against other domestic and international threats, she writes for The Diplomat.