It is perhaps indicative of our times that the peaceful transition of power by means of a democratic election is a candidate for “Disruption of the Year,” notes Anwar Ibrahim, a member of Malaysia’s Parliament, President of the Parti Keadilan Rakyat and Leader of the Pakatan Harapan coalition.

The outcome of the Malaysian general election in May was the hopeful outlier to a global trend toward populist nationalism, engineered through fear of refugees, migrants, and the “other.” The roots of change, however, extend much deeper than one electoral cycle, he writes for Project Syndicate: 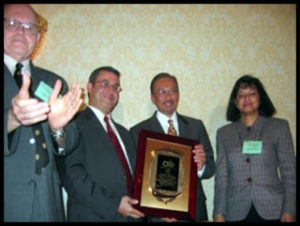 The groundwork for Malaysia’s democratic disruption was laid during 20 years of campaigning for reform. It has been part of every election since 1998, when I was summarily dismissed from government and arrested on trumped-up charges. The reform agenda, developed by Parti Keadilan Rakyat (PKR), gradually changed the political landscape. In the 2013 election, our opposition coalition actually won the popular vote but could not overturn the gerrymandered allocation of seats in Malaysia’s first-past-the-post system. RTWT

The Embassy of Canada