The global geopolitical environment is at its most dangerous in decades, according to Eurasia Group’s Top Risks report.

The warning comes on the brink of a big moment for global democracy, Axios reports.

“The leadership of roughly a quarter of the world will be decided as three of the seven largest countries by population — Nigeria, Indonesia and India — will hold general elections in the next four months. They follow Bangladesh, the eighth largest, which went to the polls last Sunday.”

“The political risk outlook for 2019 is reasonably good,” said Eurasia Group President Ian Bremmer. “But nearly all of the geopolitical developments that matter are now trending in the wrong direction. That’s unprecedented in my lifetime. These issues, if left unaddressed, will lead to big trouble down the road. This is geopolitical climate change.” 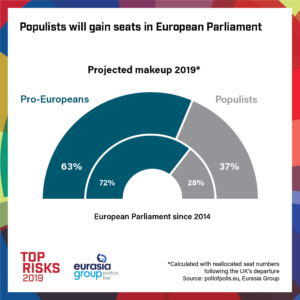 World leaders are so busy dealing with local crises that they’re ignoring much bigger problems down the road. 2019 is the year “bad seeds” are being planted that will eventually threaten the entire global order.

Examples? Political institutions across the world’s advanced democracies, the transatlantic alliance, NATO, the European Union, the G20, the World Trade Organization, Russia and the West… none of these will explode this year, but every one of them is headed in the wrong direction.

2019 will show that populists and protest movements are stronger than ever, and their unprecedented influence will undermine Europe’s ability to function, the report adds:

The presence of euroskeptics within the ranks of the European Commission will undermine that body’s cohesiveness and its ability to manage the EU’s day-to-day affairs, as well as the clarity of its message among the European public, investors, and the wider world. The historically collegial institution will become a battleground. Then, with populists in the parliament and the council as well, it will be harder to build consensus on key policy issues, including migration, trade, and the rule of law.

Nigeria faces its most fiercely contested election since becoming a democracy in 1999. President Muhammadu Buhari lacks the energy and skill to meet Nigeria’s needs. His opponent, Atiku Abubakar, wants mainly to enrich himself and his allies. If Buhari wins, much-needed reforms must wait, and militant attacks on the oil industry will worsen. His failing health could add to political infighting. An opposition win could lead to more predatory and populist governance. There’s also a wildcard risk: An inconclusive election result could create chaos.

Click here for the full report and an exclusive video.