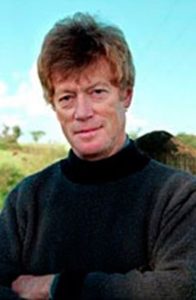 “In my view, the idea that there is a single, one-size-fits-all solution to social and political conflict around the world, and that democracy is the name of it, is based on a disregard of historical and cultural conditions, and a failure to see that democracy is only made possible by other and more deeply hidden institutions,” wrote Scruton, who passed away this week.

“And while we are willing to accept that democracy goes hand in hand with individual freedom and the protection of human rights, we often fail to realize that these three things are three things, not one, and that it is only under certain conditions that they coincide,” he added.

“In the underground universities of communist Europe, my friends and colleagues studied those things, and prepared themselves for the hoped-for day when the Communist Party, having starved itself of every rational input, would finally give up the ghost,” he added. “And the lessons that they learned need to be learned again today, as our politicians lead us forth under the banner of democracy, without pausing to examine what democracy actually requires.”

Scruton distinguishes democracy, individual freedom and the protection of human rights, on the grounds that these are ‘three things, not one’. Using that as his premise, he suggests that democracy is overrated and questions a foreign policy of championing democracy elsewhere, argued Philip Pettit, the Laurance S. Rockefeller University Professor of Politics and Human Values at Princeton University.

But he is wrong to suggest that it may be better to put aside democracy and campaign instead for institutions such as judicial independence, property rights, freedom of speech and legitimate opposition, he wrote for Democratic Audit. The promotion of these institutions is separable from the promotion of democracy, for at least two reasons, he argued:

While Scruton, the author of more than 50 books on aesthetics, morality and politics, including The West and the Rest: Globalization and the Terrorist Threat, may have been quizzical in theory, he was more resolute in practice, notes Anne Applebaum, a board member of the National Endowment for Democracy.

“In the 1980s, Roger Scruton organized money and books for dissidents in Eastern Europe. I was one of the student couriers who helped smuggle them “across the iron curtain.” I am still grateful for what Roger did for them, and for me,” she tweeted.

Modern liberals are neither Scruton-like conservatives, nor statists, according to Deirdre Nansen McCloskey. As part of its Open Future initiative to spur a global conversation on freedom in the 21st century, The Economist publishes an excerpt from McCloskey’s latest book, “Why Liberalism Works: How true liberal values produce a freer, more equal, prosperous world for all” (Yale University Press, 2019) and a short interview with her. 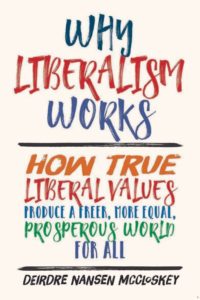 The spectrum stretches from a violently compelled right-conservative policy of imperial wars to a violently compelled left-US-“liberal” policy of class warfare. Along the spectrum the question is merely in which direction the massive coercion is to be applied, and neither rightist not leftist pauses to question its massiveness.”… Yet modern liberalism fits the modern world of high human capital better than the old rightish model of dim-witted peasants properly led by the aristocracy or the old leftish model of gormless proletarians properly led by The Party. If ever there was a time to let people go, and to have a go, it is now, when they are so obviously ready for a liberal autonomy.

Historian Timothy Garton Ash said Scruton was “a man of extraordinary intellect, learning and humour, a great supporter of central European dissidents, and the kind of provocative – sometimes outrageous – conservative thinker that a truly liberal society should be glad to have challenging it”, the BBC reports. He told the Guardian he became a Conservative when visiting Paris during the 1968 student protests, which he saw as an “unruly mob of self-indulgent middle-class hooligans” professing “ludicrous Marxist gobbledegook”.

Writer Andrew Sullivan hailed Scruton as “arguably the most acute conservative thinker of his generation (who told) the truth that conservatism is a branch of liberalism, and not its enemy (because it) tries to conserve the liberal democratic state against the corrosive effects and flaws of liberalism itself”.

Scruton, the author of a popular dictionary of political thought, asked us to consider what
we would learn if we were to “extract, both from active debate, and from the theories and intuitions which surround it, the principal ideas through which modern political beliefs find expression,”  noted Abdou Filali-Ansary, a professor at the Institute for the Study of Muslim Civilisations of the Aga Khan University in London,

One thing that would immediately draw our attention is the variety and novelty of notions that
are being used by Arab populations today to articulate their frustrations and aspirations, he wrote for The Journal of Democracy.

In the struggle to preserve democracy from the excesses of identity politics and cancel culture, Sir Roger’s legacy will be invaluable, The Australian adds.