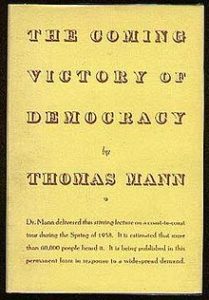 Can digital infrastructure be restructured to respect individuals? Can democracy survive a lack of privacy and autonomy? Can the dignity of man survive an omnipresent state? asks Nadia Schadlow, a senior fellow at the Hudson Institute and a former deputy national security adviser for strategy.

Authoritarian states’ external probing might matter less if democracies around the world were on firm footing. But democracies today face a crisis of confidence. In “The Coming Victory of Democracy,” Thomas Mann warned against “pure abstraction” and of the “complete isolation of the mind from life itself,” she writes for The Wall Street Journal:

He believed democratic nations were at risk of separating their “lofty ideals” from inescapable realities. Today’s rise of economic populism and backlash against globalization likely wouldn’t have surprised him. …Mann similarly worried about humanity’s susceptibility to the “charm of novelty” and the “dangerous habit” that “regards life and intellect, art and politics, as totally separate worlds.”

Social media has accelerated this separation, enabling and fueling the scourge of identity politics and tribalism that divides Americans’ common conception of themselves as a nation, adds Schadlow, a board member of the National Endowment for Democracy (NED).

On both sides of the Atlantic, embattled establishments are besieged by populist insurgents. The rebellion takes different forms in different countries, but the underlying dynamic is the same: the revolt of alienated, mostly but not exclusively native and white working-class voters against post-national metropolitan elites. This is the new class war, argues analyst Michael Lind, author of “The New Class War: Saving Democracy from the Managerial Elite.” 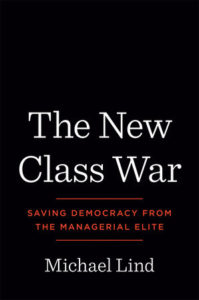 Forget the familiar three-way social diagram, with a big middle class bracketed on either end by a small upper class and small lower or impoverished class. The deepest cleavage in Western democracies yawns between college-educated managers and professionals—a third of the population, at most—and the majority who lack college educations. The new class divide is manifested in striking cleavages along the lines of geography, family relationships and politics, he writes for the Wall Street Journal:

The details of a settlement or peace treaty to end the new class war will differ among Western democracies. The great need is for a new democratic pluralism that incorporates the excluded and empowers the powerless. Today’s angry voters do not need handouts or diversionary culture wars. They need power and respect.

The Economics for Inclusive Prosperity” (EfIP) network contends that the institutional basis of a market economy is largely indeterminate. We can stick with institutional arrangements that sustain privilege and restrict opportunity. Or we can devise institutions that are consistent with the pursuit of not only shared affluence but also an expanded concept of freedom, he writes for Project Syndicate.

According to Lind, to save democracy western democracies must incorporate working-class majorities of all races, ethnicities, and creeds into decision making in politics, the economy, and culture. If they don’t, they risk perpetuating a never-ending cycle of clashes between globalists and populists, the Hudson Institute adds.

Join Hudson Institute for the live taping of episode one of season two of The Realignment podcast with Michael Lind and J.D. Vance, author of the New York Times bestseller, Hillbilly Elegy: A Memoir of a Family and Culture in Crisis, on Lind’s latest book. RSVP