As revolutionary technologies such as artificial intelligence and quantum computing stray further and further from science fiction and edge closer and closer to reality, they will increase the effectiveness, quality, and quantity of disinformation, notes analyst Eric Li. Specifically, Russia and China will be major actors in this field going into the future, he writes for the Harvard International Review:

China, as a semi-authoritarian state already using AI in oppressive manners such as through the racial profiling of Uighurs, has increased funding heavily for the AI industry and could catch up to the United States and the United Kingdom in AI innovation in as soon as five years. Similarly, with quantum computing, China has even pulled ahead relative to Western research in some areas. Russia, although having invested less in these areas, has engaged extensively in disinformation campaigns and will likely use  technological innovation to improve these campaigns. The unethical use of technology by these global powers will have dire consequences; it’s already difficult to address disinformation, and emerging technologies such as AI and quantum computing will only make it harder.

Authoritarian states, however, have not been the only force behind the rise of digital disinformation, notes  Diana Lemberg, Associate Professor of History at Lingnan University in Hong Kong and the author of Barriers Down: How American Power and Free-Flow Policies Shaped Global Media. Washington has for several decades promoted an antiregulatory vision of information freedom that now allows foreign pressure groups to manipulate what audiences in the United States read, watch, and share, she writes for Foreign Affairs: 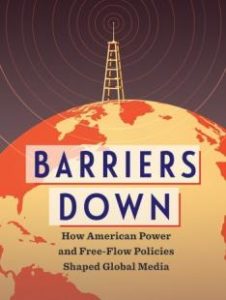 The United States’ role in global media and information traffic after 1945 might have given Americans a feeling of invincibility or control. But the country turned out to be vulnerable to the forces it had set loose. U.S. free-flow ideals had underpinned the global diffusion of communications technologies ranging from satellite broadcasting to social networking. But these same ideals also obscured the ways in which such technologies might be used contrary to U.S. interests. Seen in this light, 2016 was the moment when free flow boomeranged, with cross-border information traffic being manipulated to undermine U.S. sovereignty.

Structural approaches that facilitate a whole-of-society defense against interference are key to a successful counter-disinformation strategy, the Alliance for Securing Democracy’s Bradley Hanlon and Laura Rosenberger contend in a recent policy brief.

The Alliance for Securing Democracy is looking for a Research Assistant to join its Washington, DC-based team. Click here for more information and to apply.

There’s an insidious threat that seeks to divide the nation and undermine our faith in democracy — disinformation. Arizona State University researcher Scott Ruston offers tips on how to defend yourself (above).