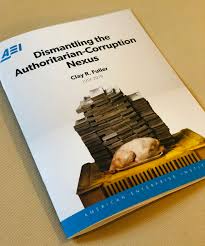 The effects of authoritarianism are amplified and obfuscated by growing economic interconnectivity. Combating authoritarianism and addressing the dark networks that support its consolidation are the unavoidable strategic challenges to global security, notes AEI analyst Clay R. Fuller:

The authoritarian-corruption nexus is the growing convergence of licit and illicit state and non-state actors that facilitates and launders the profits of illegal activity, reinforcing the strength and survival of authoritarian systems of governance everywhere. It depends on and resides in the complex and rapidly changing global economic currents flowing in and out of American markets and is the defining threat to freedom in the 21st century.

A recent discussion of the report with the author featured Bruce Bueno de Mesquita from New York University and Daniel Twining of the International Republican Institute, a partner of the National Endowment for Democracy, AEI adds:

Dr. Bueno de Mesquita discussed the role that democratic citizens play in promoting authoritarian corruption. He argued that citizens frequently demand their leaders seek favorable policy concessions from authoritarian leaders, which occurs through bribery in the form of foreign aid. Meanwhile, Dr. Twining pointed to the important leadership role the US plays in supporting more accountable and transparent institutions within the world’s most corrupt authoritarian regimes. He argued that citizens in authoritarian states share fundamental desires for freedom and good governance with citizens in democracies. RTWT

Stable and secure democratic institutions are widely believed to curb kleptocratic practices, as they inherently protect fundamental measures of accountability such as judicial independence, a free press, and a vibrant civil society. While some young or struggling democracies, such as Brazil, exhibit kleptocratic tendencies, the worst kleptocracies in the world—such as Angola, Azerbaijan, Russia, and Equatorial Guinea—fall squarely in the authoritarian category.