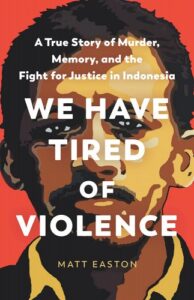 Today, millions of Indonesians may be able to vote, but the substantive rights typically accorded to citizens of a democracy are far from guaranteed, notes Krithika Varagur, the author of The Call: Inside the Global Saudi Religious Project.

Why? Some answers can be found in a probing new book about an assassination that took place in 2004, the same year as that first direct election. In We Have Tired of Violence, the American human rights researcher Matt Easton gives the true-crime treatment to the life and death of Munir Said Thalib, an influential human rights activist who was murdered on a flight from Jakarta to Amsterdam, she writes for Foreign Affairs:

If there is any powerful new bloc of Indonesian civil society, it is that of Muslim populists and religious conservatives, who became much freer after the relatively secular Suharto era and who have been far more successful in effecting change than human rights advocates have. In recent years, right-wing Muslim groups have organized huge protests of over 200,000 people and helped get dozens of sharia-inspired local bylaws on the books.

As for liberal activists, it’s a small and shrinking world, Varagur concludes. RTWT