Yemen has made an eighth consecutive appearance on the International Crisis Group’s “Ten Conflicts to Watch” list for 2023. The brightest prospect for resolving the conflict would be an extended truce that paves the way to intra-Yemeni talks, the ICG states:

A genuine settlement has to meet all major Yemeni factions’ requirements and probably requires UN mediation. But with the Houthis sensing that they get more through intransigence and Iran, the one outside actor with some influence over the group, in no mood to help, such a settlement is perhaps the least likely scenario. 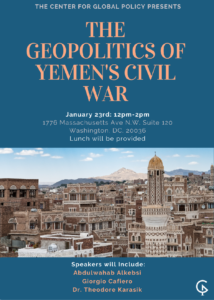 While incomparable to the humanitarian toll borne by Yemenis, the conflict has nonetheless been costly for the Kingdom of Saudi Arabia and the United Arab Emirates (UAE) regarding finances expended, the material used, and international reputations, analysts Sam Mundy and Mick Mulroy write for the Atlantic Council. Both countries seek an end to the conflict but have few good options. The best option is proactive: rather than giving in to the Houthis’ latest—and frequently varying—demands and withdrawing their support for pro-government forces, these allies should attempt to restore a balance of power in negotiations.

Navigating the Landscape in Yemen: A Conversation with Civil Society on Paths Forward for Congress was the theme of a recent House Foreign Affairs Committee hearing (see below).

On January 9, a diverse group of leading Yemeni officials, experts, academics, stakeholders, and policymakers will gather to discuss how best to reach a permanent ceasefire and build lasting peace and democracy in Yemen. The conference, organized by the Tawakkol Karman Foundation, Democracy for the Arab World Now (DAWN) and the Center for Contemporary Arab Studies at Georgetown University, will be open to the public and held at the School of Foreign Service at Georgetown University, in the Lohrfink Auditorium located in the Hariri Building, 3613-3625 Canal Rd NW, Washington, DC 20007, from 9:00 AM to 5:00 PM EST.

Register for the conference here.