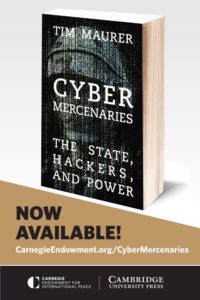 Democracies are particularly vulnerable to cyber attacks which can target institutions directly, or indirectly by undermining public trust in them. But democratic societies—because they cannot risk jeopardizing democratic values and principles—are constrained in how to prepare and respond to such attacks, according to Tim Maurer, co-director of the Carnegie Endowment’s Cyber Policy Initiative and author of Cyber Mercenaries – The State, Hackers, and Power, and Arthur Nelson,  a research analyst at the Initiative.

It is therefore paramount to focus more broadly on institutions that depend on public trust. The following three are particularly worthy of increased attention, they contend:

“It is critical that election officials have the necessary personnel, tools, and infrastructure to repel attacks from increasingly sophisticated adversaries,” @SecureDemocracy’s @davidalanlevine writes. He provides 6 steps to secure elections.

A new report, to be launched at the Munich Security Conference, explores how leading authoritarian regimes have exploited democratic norms and transformed the market for information into a dangerous tool to exert antidemocratic sharp power.

Under enormous economic and political pressures, independent media are struggling to respond, writes CEPA’s Edward Lucas, author of Cyberphobia: Identity, Trust, Security, and the Internet (above). News outlets face wrenching changes in their business models, driven by technological revolution. And features of the media system once seen only as strengths—such as competition, openness, and fair-mindedness—have also turned out to be weaknesses, according to Firming up Democracy’s Soft Underbelly: Authoritarian Influence and Media Vulnerability [PDF].

The Hewlett Foundation has assessed its efforts to examine the threat of digital disinformation  — one part of its broader Madison Initiative to strengthen the institutions of democracy in a polarized age. While grants have gone to independent research organizations that have  advanced understanding of the challenge, independent, academic research related to social media has been hampered by a key hurdle: the fact that the data essential for understanding the problems are held by individual companies, who are wary of sharing their data with independent researchers, it reports.

Democracy in the Era of Disinformation