Protesters around the world demanded change this year. While most protests were sparked by local issues, such as rising fuel prices or dissatisfaction with a leader, there were commonalities. Demonstrators shared many of the same grievances, including over economic inequality, corruption, and poor governance, the Council on Foreign Relations reports. @CFR_org

“People across the board are generally pushing to have their voices heard, and they feel like their current political systems have not been responsive,” Saskia Brechenmacher @SaskiaBrech of the Carnegie Endowment for International Peace told CFR. “So they’re trying to use other channels, such as protesting, to make a difference.”

Some 41 years ago, Vaclav Havel wrote about the greengrocer who put up the sign, “Workers of the World Unite,” among the vegetables in his store display.  Did he really believe in the slogan? “Is he genuinely enthusiastic about the idea of unity among the workers of the world?” the then-dissident poet and playwright wondered. Probably not, notes Borzou Daragahi @borzou

“He put them all into the window simply because it has been done that way for years, because everyone does it, and because that is the way it has to be,” wrote Havel, in his famous essay and book The Power of the Powerless, he writes for The Independent:

Those seeking change throughout the Middle East and North Africa, as well as in Hong Kong and Chile and other nations – including the Czech Republic, where protesters opposed to the country’s billionaire prime minister have filled the same Wenceslas Square that was the site of the Velvet Revolution – would do well to heed Havel’s spirit.

Prospects for re-energizing democracy depend on adaptation to the profound shifts in the socio-economic context of political change, says a leading analyst. 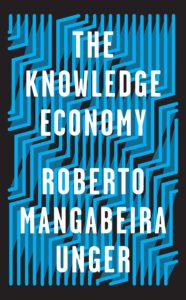 Consider the United States in the first half of the 19th century: Alexander Hamilton’s plan to build the country from above could not have been so successful if agriculture and finance had failed to be democratized, adds Roberto Mangabeira Unger, author of The Knowledge Economy, and former minister for strategic affairs in the administrations of Presidents Luiz Inácio Lula da Silva and Dilma Rousseff of Brazil.

In those two sectors, and despite the fearsome incubus of African slavery, Americans didn’t just regulate markets or attenuate their inequalities by progressive taxation and social spending. They reinvented the market economy and innovated in the institutions and laws that shape the basic distribution of economic advantage, he writes for The New York Times:

Today, such an effort, in South America and in the United States, needs a different focus. There is a new vanguard of production, founded on science and technology and marked by permanent innovation. This knowledge economy remains confined, everywhere in the world, to fringes that exclude the vast majority of workers and businesses, with far-reaching consequences for economic slowdown and inequality. Denial of the most advanced practice of production to most people and businesses in even the richest countries has slowed growth. The chasm between the advanced and backward parts of the economy has generated an inequality too severe for progressive taxation and redistributive social spending to correct. RTWT

One reason for cautious optimism with respect to democratic renovation is that the world’s poorest people have made unprecedented economic, health and education advances during the last quarter of a century, said Carl Gershman, President of the National Endowment for Democracy, a phenomenon documented by the Georgetown University development scholar Steven Radelet in his new book The Great Surge: The Ascent of the Developing World.  According to Radelet, one billion people have been lifted out of poverty since the early 1990s, reducing by half the number of extremely poor people in the world, he observed in the annual John B. Hurford Memorial Lecture titled, “A Strategy for Democratic Renewal.”