President Vladimir Putin said on Thursday Russia is not planning to create a military alliance with China, despite Moscow helping Beijing build a missile attack warning system, Reuters reports (HT:FDD). Yet Russia and China are effectively employing the art of deceit, pairing up to undermine democracy through sharp power, a new report suggests.

Of course, the Kremlin is hardly reluctant to employ more violent methods…………

The last fortnight has seen new revelations in two separate cases of suspected Russian state murder, notes Michael Weiss, Executive Consulting Editor of Coda Story who writes regularly about Russian espionage and disinformation campaigns. In one of these cases, the alleged hit squad was directly a unit of the GRU, Russia’s military intelligence service. In the other, German authorities recently concluded that there is “sufficient evidence” that the Russian state, or its federated southern republic Chechnya, is responsible for the execution-style killing of an ethnic Chechen asylum-seeker, he adds.

The GRU, also responsible for interfering in the 2016 US presidential election, is now believed to have been liquidating the enemies of President Vladimir Putin throughout Europe, including in NATO countries, he writes for The New York Review of Books: 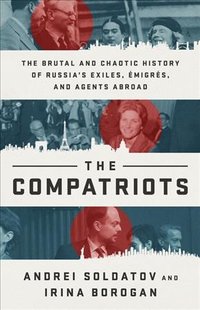 A fine and timely new book explores the origins of Moscow’s Murder, Inc.— what is euphemistically known in Russian as mokroye delo, or “wet work.” In The Compatriots: The Brutal and Chaotic History of Russia’s Exiles, Émigrés, and Agents Abroad, authors Andrei Soldatov and Irina Borogan show that what has become the institutional practice of Moscow’s security organs was honed in the early decades of Soviet government, when it perfected its methods against members of the Russian diaspora. A main focus of The Compatriots is one of the USSR’s most lupine spymasters, in effect one of the founding fathers of the Kremlin’s international assassination policy: Nahum Eitingon.

Deepfakes and misinformation means there is a need to constantly learn and adapt, the founder of investigation website Bellingcat, Eliot Higgins told the BBC.