The United States and Europe are understandably wary of engaging in direct conflict with Russia, but they can still do more than provide short-term assistance to Ukraine, argues Bruce Ackerman, Sterling Professor of Law and Political Science at Yale University.

Now is the time to start taking steps to establish NATO as a credible force for the defense of Western democracy in the 21st century. Bold measures are required, including dramatically revising the NATO treaty, raising an army in Europe and even expelling countries who have betrayed their democratic commitments, he writes for POLITICO:

The challenges ahead are extraordinary. But the reconstruction of NATO not only represents the West’s best chance to prevent future Russian aggression. It also offers an opportunity for the United States and Europe to revitalize the great Enlightenment tradition of liberal democracy against the nationalist demagogues seeking to destroy it on both sides of the Atlantic.

Sweden and Finland’s likely accession to NATO is legitimate and understandable, says a leading expert.

As a nation formerly subjugated by Moscow, “Finland in particular is right to start considering their security, the Russians are perfectly capable of harassment,” said the Atlantic Council’s Daniel Fried (above), a National Endowment for Democracy (NED) board member. 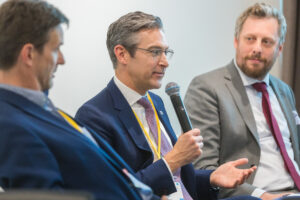 The international order should be bolstered by NATO as an alliance of free nations acting in solidarity with democratic nations beyond the transatlantic community in Asia and the Global South, National Endowment for Democracy (NED) President & CEO Damon Wilson (right) told the ICDS-International Centre for Defence and Security’s Lennart Meri Conference).