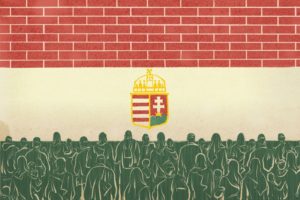 Last July, Hungarian Prime Minister Viktor Orbán addressed members of the Hungarian right at their annual summer festival in Transylvania, notes Brookings analyst William Galston. Europe, he said, was being “de-Christianized” by elites who wanted a “new, mixed, Islamized” continent. “The main question over the next few decades is this: Will Europe remain the continent of the Europeans?” Orbán meant white, Christian Europeans who reject the European Union’s liberal, “globalist” values on everything from gay rights to multiculturalism, he writes for the New Republic.

If you were to donate hundreds of millions of dollars over several decades to promoting democracy and freedom all over the world, what sort of reaction might you expect? the Economist asks. Orban and Fidesz are not yet done cementing their vision of illiberal democracy in Hungary. They have announced their intention to pass a so-called “Stop Soros” law that would make life even more difficult for NGOs …Schools are also in the crosshairs, the Economist adds:

Over the past year the government has been trying to use bureaucratic technicalities to close down the prestigious Central European University, also launched by Mr Soros in the 1990s and now one of the most respected academic institutions in eastern Europe. The university’s application for recertification is still pending. Its rector, Michael Ignatieff, a Canadian philosopher and former Liberal politician, says it does not plan to leave Budapest, but that it cannot start another academic year with its status uncertain.

Throughout Europe, immigration is at the core of the populist critique of the liberal democratic order, adds Galston, the author of Anti-Pluralism: The Populist Threat to Liberal Democracy:

Orbán, Geert Wilders in the Netherlands, Marine Le Pen in France, Matteo Salvini in Italy, and many others have all highlighted the EU’s stance on immigration, raising important questions about economic globalization, political transnationalism, and cultural liberalism. Dismissing their concerns as retrograde is counterproductive. Countering them means taking seriously the questions they bring up, while offering better answers than unscrupulous demagogues like Orbán can muster.