Richard Pipes, the author of a monumental, sharply polemical series of historical works on Russia, the Russian Revolution and the Bolshevik regime, and a top adviser to the Reagan administration on Soviet and Eastern European policy, died on Thursday at a nursing home near his home in Cambridge, Mass., the New York Times reports:

Professor Pipes, a moralist shaped by his experiences as a Jew who had fled the Nazi occupation of Poland, would have none of it. He presented the Bolshevik Party as a conspiratorial, deeply unpopular clique rather than the spearhead of a mass movement. He shed new and harsh light on the Bolshevik campaign against the peasantry, which, he argued, Lenin had sought to destroy as a reactionary class. He also accused Lenin of laying the foundation of the terrorist state that his successor, Joseph Stalin, perfected.

“I felt and feel to this day that I have been spared not to waste my life on self-indulgence and self-aggrandizement but to spread a moral message by showing, using examples from history, how evil ideas lead to evil consequences,” Professor Pipes wrote in a memoir. “Since scholars have written enough on the Holocaust, I thought it my mission to demonstrate this truth using the example of communism.” 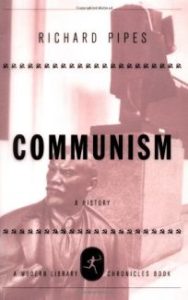 Russia today, as in the past, consists of a multitude of tiny enclaves to which the government feels no responsibility and which expect very little from those who rule them. Judging by voting results, a mere 10% of Russians, mostly concentrated in large cities, hold Western views of the powers and duties of government, he write in “Why the Bear Growls,” a March 1, 2006, Journal op-ed:

The cause of this is in some measure the deliberate refusal of the post-communist regime to make a clean break with the Soviet past. Outside of the two capital cities, Moscow and St. Petersburg, the relics of the communist era are everywhere in evidence. . . . According to opinion polls, nearly one-third of Russians, presumably mostly residents of rural districts and small towns, are not aware that the Soviet regime no longer exists: They still continue to view it as “their” government.

“Bewildered by a world in which they have been unable so far to find a secure place for themselves and perplexed by the uncertainties of freedom, Russians are instinctively withdrawing into the familiar universe of autocratic rule,” he wrote in a NYT review of books on Russian’s democratic prospects:

Since experience has taught them they can have no influence on affairs of government no matter what the regime, they are willing to let their rulers do as they please so long as they allow them to pursue their private interests. They are profoundly apolitical because they can see little that government can do for them or they for the government…..Russians have been and continue to be so indifferent to what we in the West consider indispensable: political engagement and civil rights.

Pipes wrote an appreciation of the Polish dissident philosopher Leszek Kolakowski for the National Endowment for Democracy’s Journal of Democracy.