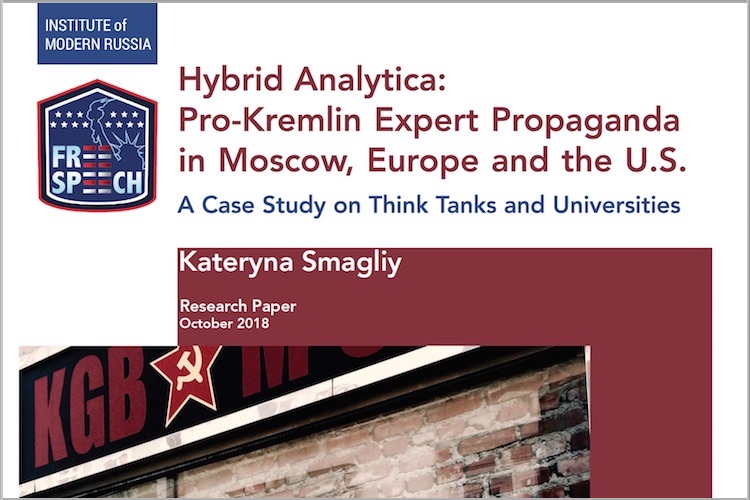 China isn’t the only authoritarian state boosting its investments in sharp power.

Russia is investing millions of dollars to have its propaganda delivered to Western audiences under the guise of more “nuanced” interpretations of politics and international events, says a new analysis from the Institute of Modern Russia (IMR). Despite the ruble in freefall and anti-Kremlin sanctions, Russia is diligently continuing to increase state funding for its propaganda machine by around 30 percent per year, according to the report titled “Hybrid Analytica: Pro-Kremlin Expert Propaganda in Moscow, Europe and the U.S.: A Case Study on Think Tanks and Universities,” authored by Dr. Kateryna Smagliy, with a contribution from Ilya Zaslavskiy.

The authors define “hybrid analytica” as “the process of design, development and promotion of various pseudo-academic narratives by duped or manipulated bona fide intellectuals, academics and think tank experts or political ‘lobbyists in disguise,’ whose vested interests have been recruited through the global network of the Kremlin-linked operatives.” It is designed “to support and accommodate the international or domestic agenda of the Putin regime” and leads to the “demolition of factuality, disinformation, intentional misinterpretation of events, undermined trust in expertise, and overall pollution of the policymaking and public debate environment.”

The paper outlines the Kremlin’s connections with think tanks, universities, and research institutions in Russia, Europe and the United States entails the co-optation of experts into a pool of proxy communicators for the Putin regime. The authors explain how Kremlin-linked think tanks design new ideological doctrines for the Russian government and how various Kremlin sympathizers promote pro-Kremlin propaganda narratives in the West, highlighting the role of Russian intelligence services and Russian institutions of soft power in the design and implementation of the present-day strategies of knowledge weaponization and ideological subversion.

Western governments and academic institutions should officially acknowledge the threat posed by Russia’s subversive information warfare, step up efforts to expose Russia’s network of agents within Western academia, and adopt mechanisms to safeguard professional integrity and due diligence processes, the authors contend.

Defenses of naivety or “keeping dialogue open” are no longer valid excuses for either conscious or unwitting engagement in Russia’s influence campaign against other countries and international organizations, the paper concludes:

It is high time to acknowledge that participation in Kremlin-linked debate venues such as the Valdai Discussion Club, as well as invitations of Russian “hybrid” analysts to the West, almost exclusively leads to uncritical propagation of Moscow-friendly narratives, spreading more disinformation and polluting the information space with specious narratives….. The strategy of shedding light on what pro-Kremlin experts say, write and advocate is likely to prove much more effective, not least because it ensures that the truth is out there to set the record straight. Closer media scrutiny of the Western think tank community is in itself a huge antidote to the possibility of shadow political lobbying.