The Indo-Pacific presents major strategic opportunities for the U.S., which still enjoys significant strengths. But perhaps its greatest asset in the region, however, is its democratic allies, particularly Japan, South Korea, and Australia. As a result, U.S. Indo-Pacific strategy should focus on strengthening ties with the democracies of the region and making those democracies stronger and more secure, analyst Roger Cliff writes in A New U.S. Strategy for the Indo-Pacific, a report for the National Bureau of Asian Research. 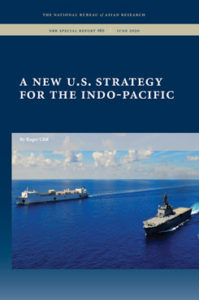 POLICY IMPLICATIONS
To protect and advance its interests in the Indo-Pacific, the U.S. should adopt a strategy toward the region that includes the following main elements:

More than half of the world’s population resides in the Indo-Pacific, including over two billion
people (more than half the regional population) who are living under democracy. The region also generates a third of the world’s economic output, more than any other region of
the world. The United States has more trade with the Indo-Pacific than with any other region, and three of its most important allies (Japan, South Korea, and Australia) are located there, Cliff adds: