A recent public hearing of the US House Intelligence Committee dealt with the threat of rising authoritarianism and warned that liberal democracies are facing their most serious crisis in decades. Left unsaid at the hearing was a discussion of one of the most potent weapons democracies have to check the power of autocrats: feminism, says analyst Leta Hong Fincher.
Anyone concerned about the rise of the “strongman” should pay attention to how feminist activists in China are posing an unprecedented challenge to the patriarchal, authoritarian state, she writes for the South China Morning Post: 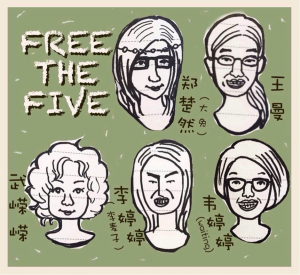 This International Women’s Day marks the fourth anniversary of the Chinese government’s detention of five young women who became known as the “Feminist Five”….On February 19, more than two dozen female world leaders released an open letter urging the international community to fight against the global erosion of women’s rights.

“Now we collectively call attention to the need to achieve full gender equality and empowerment of women across all ambits of society,” says the letter, signed by prominent women leaders such as Ethiopian President Sahle-Work Zewde, former prime minister of New Zealand Helen Clark and Susana Malcorra, the former Argentinian foreign minister.

Persistence and coalition building are key to women’s empowerment, argues Ellen Carol DuBois, distinguished research professor at the University of California Los Angeles and the author of several history books about the U.S. suffrage movement, including the forthcoming “Suffrage Women’s Long Road to the Ballot Box.” That is the lesson of the women’s suffrage movement, she writes for the Washington Post. 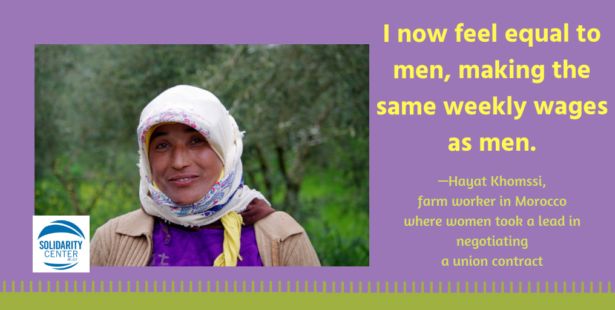 Since Morocco’s  Democratic Labor Confederation (CDT) negotiated an agreement in 2015 with  the agro-industrial company Les Domaines Brahim Zniber, women workers receive better wages and have access to healthcare, a nurse-staffed clinic, improved job safety and ensured access to toilets and regular meal breaks, writes Solidarity Center Communications Officer Tula Connell. The workers tell their story in a new video produced by the Solidarity Center [a core institute of the National Endowment for Democracy] titled Morocco Women Farm Workers Stand up for Their Rights:

The pact follows a multi-year education and training effort by the CDT, with support from the Solidarity Center, to help workers in orchards, olive groves and vineyards improve their working conditions. The agreement’s success stems in large part from the gender equality trainings by CDT and Solidarity Center. Launched in 2007, the training enabled women to understand their rights and to take steps to improve their difficult conditions, says Touriya Lahrech, coordinator of the CDT’s Women Department and a member of its executive board.

What are the biggest problems facing women today? POLITICO asks a broad range of activists and analysts.

The Flame of Feminism Is Alive in Iran

While Western activists defend the right of Muslims to wear the veil, Iranian women are fighting for a bigger cause: choice, Roya Hakakian writes for Foreign Policy.

Despite the significant progress made in women’s political participation, there remains substantial resistance to women assuming positions of political power. Seventy-five percent of all legislators in the world are men; 65 percent of them over the age of 40. Political equality – for women and for young people – is one of the highest hurdles democracy still faces, the National Democratic Institute’s Derek Mitchell notes:

To help to address this issue, NDI has launched think10, a groundbreaking safety planning tool which guides women in politics to take a series of actions to reduce their vulnerability. While the risks that politically-active women face cannot be reduced to zero, using think10 allows them to enhance their personal security within their own political context.

A Woman’s Place is in Parliament, say IRI’s Meribeth Bustamante and Scott Nemeth. But women are under-represented in legislatures worldwide. To combat this trend, the International Republican Institute (IRI) and The House Democracy Partnership (HDP), a bipartisan commission of the U.S. House of Representatives that supports peer-to-peer engagement with 21 partner legislatures around the world, gathered women leaders for a week long Women Lead seminar (below), IRI’s Scott Nemeth writes. Women members of parliament from Colombia, Ecuador, Georgia, Guatemala, Haiti, Indonesia, Kenya, Liberia, Peru and Tunisia discussed ways to collectively improve inclusion and representation.

Next week in New York, NDI, in partnership with Liberal International and the International Network of Liberal Women, will convene thought leaders and international practitioners on the front lines of women’s rights at two parallel side events at the 63rd UN Commission on the Status of Women.

The meeting “provides an important opportunity for governments to speak to their commitments and raise important issues to promote women’s empowerment and gender equality,” says NED board member Melanne Verveer, the first US ambassador at large for global women’s issues. “Governments should take seriously not only this New York meeting, but also the implementation of gender equality policies and initiatives at home.” 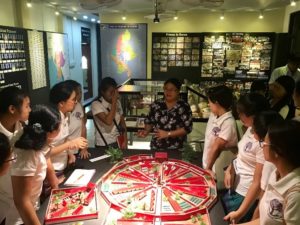 International Women’s Day affords an opportunity to reflect on the victories and ongoing struggles faced by women around the world, writes Rebecca Turkington, assistant director of the Women and Foreign Policy program at the Council on Foreign Relations:

Kelly Dittmar, a scholar at the Center for American Women and Politics and Sandra Pepera, Director of the Gender, Women, and Democracy Program at the National Democratic Institute joined CFR to discuss which mechanisms have helped—or hindered—women in rising to public office.

Women in Burma, by law, have the right to vote, run for office, and own property.  Nevertheless, strong cultural norms and ingrained discrimination remain a major obstacle to gender parity in Burma. The Women’s Initiative Platform (WIP) is a civil society organization working with support from NED to advance the status of women in Burma, to increase female political participation, and to end violence against women and girls.

The Middle East Media Research Institute (MEMRI) is highlighting its focus on women’s issues in the Arab and Muslim world. The MEMRI Women’s Studies Initiative researches, examines, translates, and analyzes Arab and Muslim primary media sources in order to report on women’s status, struggles, and triumphs across the region, and aims to help advance women’s rights in the region.