The Islamic Republic of Iran is strengthening the security forces and religious institutions that constitute the two key pillars of the regime, says an Institute for International Strategic Studies analysis. Iran’s 2018-19 budget shows an “upward trajectory” for defense spending, Radio Farda reports:

An 84% rise in the budget allocated to Iran’s police force and the controversial rise in the budget of numerous religious institutions, that do nothing but trumpeting Tehran’s Islamic ideology and training clerics, are examples of the way the government “mishandles” the country’s resources, according to critics. Even regime insiders protested to these excessive fund allocations.

During protest demonstrations since December 2017, massive groups of underprivileged Iranians including industrial workers, truckers and teachers protested against the increased spending on security forces and regional military ambitions, and proliferation of hardline religious institutions who received hundreds of millions of dollars to such institutions in the annual budget.

“An analysis of the Iranian budget should go beyond examining outlays for Iran’s regular forces (Artesh), the IRGC and the Basij militia,” the London-based IISS adds. “Any calculation of Iran’s defence spending should also take into account Iran’s police force (the Law Enforcement Force, or LEF), armed-forces welfare, and the numerous ideological training and defence-research facilities and universities focused on cultivating suitably ‘Islamicized’ personnel to serve both of Iran’s military forces and developing strategy.”

“Since the LEF is responsible for Iran’s internal security, this steep rise in LEF funding most likely comes in response to several incidences of internal dissent,” the report states.

The IISS report is consistent with the findings of analysts, including Radio Farda’s Morad Veisi who, while explaining the expansion of IRGC Intelligence Organization and its media outlet, noted that the latest annual budget included “non-official financing for non-uniformed regime supporter groups. Their budget remains hidden in appropriations for official organs, such as intelligence organizations and the IRGC. The state also provides a variety of financial support mechanisms for loyal groups, some from religious institutions and mosques.”

Iran-led operations are creating enormous political and security challenges for the Sunni Arabs and all regional powers, creating further instabilities in an already turbulent Middle East, says a prominent analyst.

The growing regional role of Iran’s Islamic Revolutionary Guard Corps has garnered greater attention in recent years, but detailed analysis on the mechanics of this expansion is still lacking, The Washington Institute writes. To fill the void, senior military advisor Nader Uskowi wrote the new book Temperature Rising: Iran Revolutionary Guards and Wars in the Middle East (Rowman & Littlefield), which he completed during his time as a visiting fellow at The Washington Institute. To mark the book’s recent launch, the Institute hosts a Policy Forum featuring Uskowi and expert commentators Ali Alfoneh and Alex Vatanka. Copies of the book will be available for purchase at the event.

Nader Uskowi is a nonresident senior fellow with the Atlantic Council’s Scowcroft Center for Strategy and Security. Previously, he served as the senior civilian policy advisor to U.S. Central Command, where he focused on regional military posture toward Iran and Shia militias.

Ali Alfoneh is a senior fellow at the Arab Gulf States Institute, the principal Iran analyst for the Arab Weekly, and author of Iran Unveiled: How the Revolutionary Guards Is Turning Theocracy into Military Dictatorship (AEI Press, 2013).

Alex Vatanka is a senior fellow at the Middle East Institute, a former managing editor with Jane’s Islamic Affairs Analyst, and a senior fellow in Middle East studies at the U.S. Air Force Special Operations School at Hurlburt Field. His publications include the book Iran and Pakistan: Security, Diplomacy, and American Influence (2015).

Women internationally have long relied on daily acts of resistance to challenge patriarchal systems.  In Iran, women are using everyday resistance  tactics to challenge rules that attempt to control their bodies, analyst  Madison Schramm writes for the Georgetown Institute for
Women, Peace and Security:

Women’s bodies are highly regulated in Iran. Shortly after the revolution, then Supreme Leader Khomeini introduced laws requiring all women to wear the hijab and conform their attire to religious teachings. Women are required to wear floor length pants or skirts, long sleeve coats that reach between their knees and mid-thighs, and to cover their heads.

As the leader of the Wednesday movement and My Stealthy Freedom, Masih Alinejad explained, “It’s just the first step after the revolution that the government started to control our body.” RTWT

Join a conversation with world-renowned Iranian activists and experts on the women’s rights movement in Iran this Wednesday, December 5 at Georgetown University. 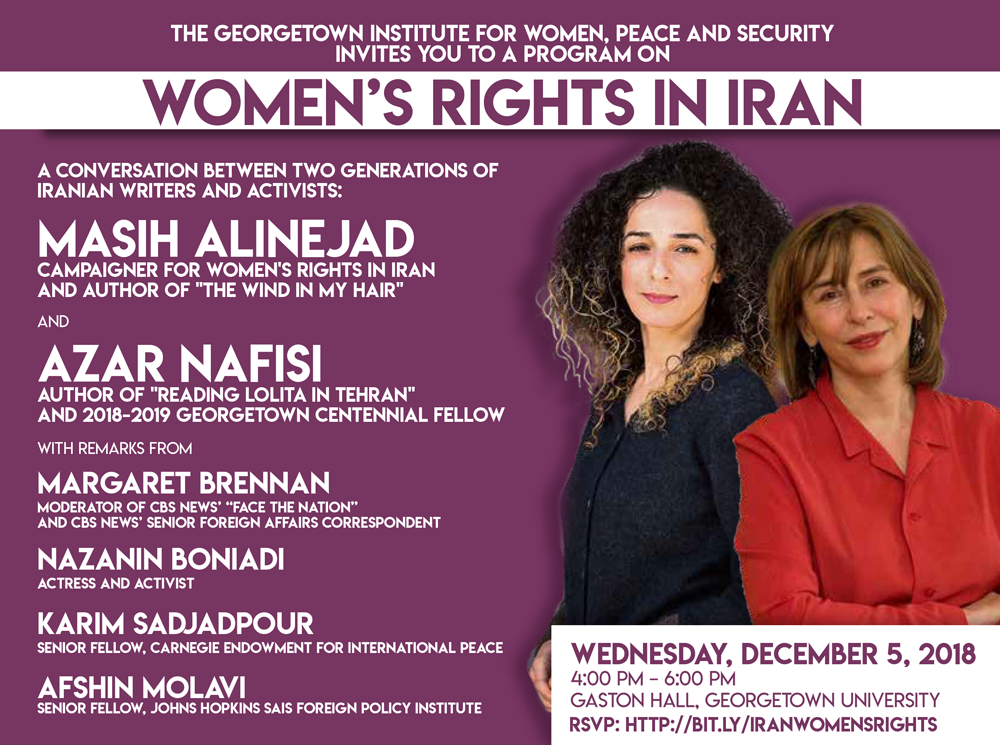