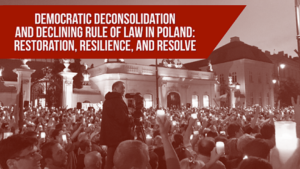 Less than 9% of people in Poland believe that the country’s courts function better now than they did before the current government came to power in 2015, while over half think they have got worse, reports suggest.

It follows a number of other surveys showing dissatisfaction among the public with the government’s radical overhaul of the judiciary, which has brought Poland into conflict with the European Union over the rule of law.

The EU’s unprecedented withholding of Covid relief funds highlights the gravity of Poland’s battle for an independent judiciary, the National Endowment for Democracy (NED) adds:

In a forthcoming panel discussion, Polish human rights lawyer Michał Wawrykiewicz examine the role of the legal community in civil society, where success has been found in fighting back against the decline of the rule of law, and what the future holds for Poland’s judicial branch. Włodzimierz Wróbel, Supreme Court Justice of the Republic of Poland, and Fernanda Nicola, Professor of Law at American University, will offer comments. NED Senior Program Officer Agnieszka Gmys-Wiktor will moderate.