Democracy is “not a one-way street,” and democratic nations can fall back into authoritarianism, according to Mike Abramowitz, president of Freedom House, and Sanford School Dean Judith Kelley. They joined moderator Sanford School Professor Fritz Mayer (above) to discuss international political trends that are challenging norms that sustain freedoms and civil society, writes Polis’s Jennifer Sullivan.

While the rise of populism merits concern and demands action, it should not trigger panic, says Brookings analyst William A. Galston. “Although complacency could prove disastrous, the ability of democratic regimes to respond to public discontent is the key to their resilience and the source of their superiority to authoritarian forms of governance.”

Is liberal democracy resilient enough to confront the challenges it faces? How can we define, evaluate and measure democratic resilience? What makes some democracies more durable than others? And why do some countries experience the erosion of democratic qualities, backsliding from democracy, or even its total failure? Heidi Koolmeister asks in a paper for the International Centre for Defense and Security, the Estonian think-tank.

“What ultimately makes advanced democratic capitalism resilient in the face of technological change and the rise of the populist challenge is the continued expansion of education combined with opportunity in the advanced sectors,” Torben Iversen and David Soskice conclude in Democracy and Prosperity: Reinventing Capitalism through a Turbulent Century. “Only in an extreme crisis like the Great Depression is there a serious risk that populism may grow so widespread that the foundations of both advanced capitalism and democracy will come under attack.”

“Internal factors and influences are decisive in whether a regime will be durable or fragile in a situation in which it is influenced by both internal and external changes, challenges and crises,” she notes. “At the same time, external actors like the EU can have a positive effect on the internal resilience of democracy.”

For example, the EU’s Global Strategy on Foreign and Security Policy adopted in 2016 focused on supporting resilience both within and beyond the continent.

Yet European ambitions cannot advance through mere wishful thinking and to abandon them at the first challenge is unlikely to appease its challengers, writes analyst Geoffrey Harris. He cites the German Marshall Fund’s Nicholas Bouchet’s observation that “countering Russia’s anti-democratic agenda requires a better understanding of why and how it has been successful in containing and rolling back Western democracy promotion efforts”: 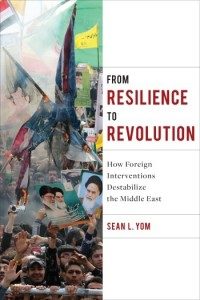 At the dawn of the postcolonial era, many autocratic states had little support from their people and struggled to overcome widespread opposition, he writes in From Resilience to Revolution: How Foreign Interventions Destabilize the Middle East.  When foreign powers intervened to bolster these regimes, they unwittingly sabotaged the prospects for long-term stability by discouraging leaders from reaching out to their people and bargaining for mass support—early coalitional decisions that created repressive institutions and planted the seeds for future unrest, he observes, drawing on comparative historical analyses of Iran, Jordan, and Kuwait.

To increase resilience, democracy must be shown to work through the power of demonstration, argues Brookings analyst Ken Opalo.

“China’s economic success is increasingly challenging the claim that only accountable democratic government can deliver sustainable improvements in citizens’ living standards,” he suggests. “In the main, the future of electoral democracy in Africa will depend on governments’ ability to improve living standards in the region. This has important implications for the design and implementation of Western democracy promotion programs.”

Many “third wave” democracies have problems with re-consolidation and democratic backsliding, notes the International Institute for Democracy and Electoral Assistance 2017 report on “The Global State of Democracy: Exploring Democracy’s Resilience.” In Facing Up to the Democratic Recession, an article for the NED’s Journal of Democracy, Stanford University’s Larry Diamond estimates that the decline in democracy can be traced back to 2006, Koolmeister observes:

“These signs of the increasing fragility of democracy mean that, when faced with the changes, challenges and crises that could push a democratic regime over the edge towards authoritarianism, a state’s resilience is crucial for its survival,” she adds.