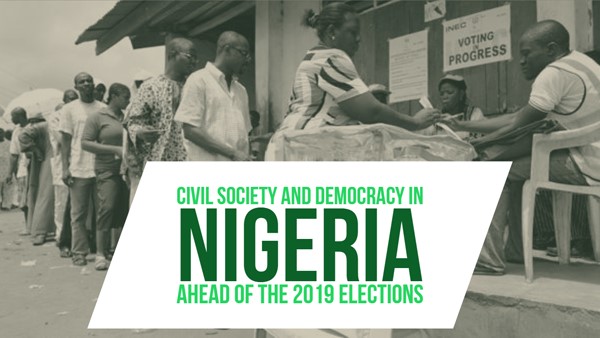 Is Nigeria’s democracy increasingly fragile or does it give grounds for optimism?

Nigeria is the sixth largest electoral democracy in the world, and 2019 will mark 20 years since the military handed over power to civilian leaders, the longest stretch of unbroken civilian rule in its history and one of the longest in Africa. Despite these successes, Nigeria remains beset by political marginalization, corruption, economic stagnation, and insecurity.

The country’s political transformation has yet to deliver the full dividends of democracy to the average citizen. The 2019 elections will test the resiliency of Nigeria’s democratic institutions, inevitably highlighting the weakness, but also providing opportunities for growth and reform. Civil society will play a pivotal role in buttressing these democratic gaps and driving reform.

It was appropriate that President Muhammadu Buhari (left) was the first sub-Saharan African leader to have an Oval Office visit with President Trump, said USIP President Nancy Lindborg. Nigeria is the largest democracy on the continent and continues to be a bellwether for democracy and good governance across Africa.

But without meaningful steps to curb corruption and create a more responsive, inclusive government, she added, inter-communal conflicts, extremism and rising criminality will continue to undermine the progress and potential of this regional giant.

Buhari’s performance and long absences due to illness have prompted calls for a revision of Nigeria’s de facto two-party system. But Peter Lewis, professor of African studies at Johns Hopkins University, says there is limited scope for a third force in a country where machine politics rules, the FT adds:

That does not mean Mr Buhari will necessarily win, he adds, citing the president’s fragile health and less than compelling record. The personalities battling it out may be from the past. But, says Mr Lewis: “I’ve never seen politics in Nigeria as fluid and uncertain as they are now.”

The National Endowment for Democracy has conducted a program of support for civil society in Nigeria for more than three decades. These partners have fought against dictatorship, guided the transition to democracy, and worked to deepen democracy by strengthening the rule of law and expanding political inclusion. NED recently commissioned Dr. Darren Kew to conduct an independent evaluation of its grants to civil society organizations, specifically looking at this last stage. Over the coming months, many of these same partners will work to ensure that the elections are governed by the rule of law and are inclusive in nature.

Dr. Kew will discuss questions including: How has civil society influenced Nigeria’s political trajectory over the last decade? What are, and should be the major priorities of Nigerian civil society going into the elections? Following Dr. Kew’s presentation, participants will be invited to share their thoughts on strategies for how civil society can be supported during the elections.

featuring a conversation with:

Author of An Independent Evaluation of the National Endowment for Democracy’s Grants Program in Nigeria, 2012-2017

Program Officer for West Africa at the National Endowment for Democracy

Light refreshments will be served

All cameras and media must register with NED public affairs.

Please email press@ned.org to register as a member of the press.