In a kleptocracy, criminal behavior is not individual, opportunistic, or sporadic, but rather collective, systematic, strategic, and permanent. It is a system in which all the high-level government officials are complicit, where they deliberately work to enrich themselves, and then use their accumulated wealth to perpetuate themselves in power, notes analyst Moises Naim. The case of the inept in power is something different, he writes for El Pais:

Kakistocracies (literally, governments by the worst) proliferate in weak and disorganized political systems that repel the talented and attract the inept and most debased. Obviously, sometimes they come together producing a government that is both criminal and incompetent. When the two coincide, kleptocracy and kakistocracy feed on each other.

It seems that the BRICS – Brazil, Russia, India, China and South Africa – do have something in common after all — corruption. In all five countries, popular rage about graft is at the very heart of politics. And because these countries are increasingly important to the world economy, their corruption problems have global implications, the FT’s Gideon Rachman notes: 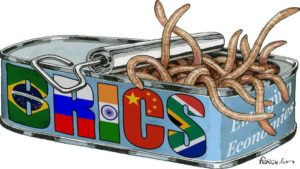 But conquering corruption is not something that can be achieved with a single cathartic effort. Lasting progress requires strong institutions that can survive changes in the political climate; independent courts and prosecutors with training and resources; a press that cannot easily be bought off, jailed or killed; efficient civil servants who cannot be fired at the whim of a corrupt boss. ….Searching for examples of lasting cultural change in the battle against corruption, Brazilian prosecutors have lighted upon the example of Hong Kong ….

Chinese-financed projects have been embroiled in controversies over Central Asian kleptocracy, according to the University of Kent’s Balihar Sanghera and Elmira Satybaldieva. For example, Tajikistan’s ruling elites were accused of fraud when they transformed a BRI highway project into a toll road, they write for Open Democracy.

The cover-up of Malaysia’s 1MDB scandal was taking the country toward autocracy — until the people’s democratic tsunami won the day, notes Alex Helan, who specializes in security and corruption issues in the Asia-Pacific.

Prime Minister Najib Razak’s fall is a reminder that tyrants are not invincible, and that U.S. interests, in the long term, are best served by supporting those fighting for the rule of law, financial transparency, and anti-corruption efforts than by short-term alliances with strongmen, he writes for Foreign Policy.

Suppressing journalists and civil society activists is standard procedure for authoritarian regimes, but threats against those within democratic societies represent a new emboldening of those who disregard the rule of law in pursuit of power and profit, the Hudson Institute’s Nate Sibley notes. But with political will, lawmakers could quickly turn democracies’ weaknesses into leverage, he writes in a new Power 3.0* blog post – “Countering Transnational Kleptocracy: How Democracies Can Lead the Way:”

*An initiative of the NED’s International Forum for Democratic Studies.