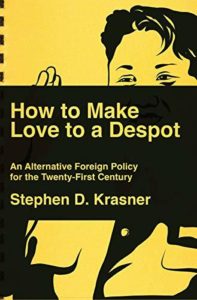 Former State Policy Planning Director Steve Krasner (someone we have worked with and respect) has written a piece in Foreign Affairs (“Learning to Live with Despots”) that advocates realism as the guiding principle of U.S. foreign policy, note the Atlantic Council’s Daniel Fried, a National Endowment for Democracy (NED) board member, and Ash Jain, who oversees the Atlantic Council’s Democratic Order Initiative.

He means by this less U.S. emphasis on democracy in the world (which he calls an attempt “to remake other countries in the American image”) and more emphasis on achieving practical results with non-democratic states: more security, stability, economic growth, and fewer transnational threats (e.g., terrorism, proliferation, and drug trafficking), they write for the National Interest.

The United States and its allies may have to work with authoritarians, but let’s couple that with doubling down on investment in democracy, including in authoritarian countries, they argue:

We’ve done this before: during the Cold War, realism accepted that the Soviet Union’s communist empire in Europe was eternal. The policy of détente did not challenge that and kept the United States apart from issues of Soviet repression in favor of pursuing strategic stability and trade. But America won the Cold War when it learned to pursue dialogue with the Soviets while simultaneously supporting dissidents in countries across the Warsaw Pact. RTWT