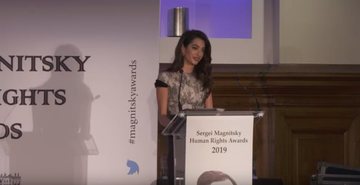 Officials and prosecutors who arbitrarily detain journalists or impose blanket restrictions on free expression should be subject to a new regime of targeted international sanctions, according to a panel report drafted by the barrister Amal Clooney (above). The proposal, coming in the midst of an unprecedented era of attacks on the rights of journalists, represents a blueprint for a radical extension of potential sanctions to protect reporters in countries such as Turkey, Iran or Saudi Arabia, The Guardian reports:

The report denies that the proposals will “open the floodgates” to the imposition of too many sanctions covering any violation of the rights to liberty or a fair trial. It points out the Magnitsky laws, which authorise the US government to sanction those who it sees as human rights offenders, make clear there has to be a serious abuse of human rights, including a prolonged detention without charge, for sanctions to be contemplated. An independent national committee of senior jurists might also be appointed to advise governments of repressive acts against reporters that might warrant sanctions.

In the wake of an unprecedented assault on media freedom, the Independent High Level Panel of Legal Experts on Media Freedom landmark report on “Magnitsky” targeted sanctions advocates its global adoption and vigorous implementation, and explains how the legislation may provide a paradigm shift to combat impunity and protect press freedom, the Raoul Wallenberg Centre for Human Rights adds. 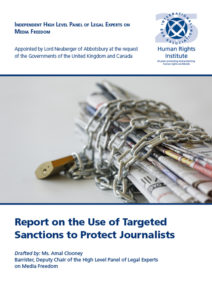 “A consistent use of targeted sanctions when journalists are killed and arbitrarily imprisoned would help to raise international awareness and shift the default from impunity to accountability,” the report notes. “There is an important opportunity for states to lead with a new paradigm that when the media is attacked, targeted sanctions will be a counterattack.”

“Sanctioning the architects of repression is a crucial expression of solidarity towards their victims, and the most effective means of ending the culture of impunity that underpins their criminality,” said Cotler, who introduced Canada’s first Magnitsky Bill, and under his Chairmanship the Raoul Wallenberg Centre for Human Rights successfully spearheaded the legislation’s unanimous passage in 2017

“My hope is we can join forces to create our own cautionary tale, one that signals to the autocrats of this world that when they try to silence journalists, they will hear from all of us,” Clooney (below) told the Sergei Magnitsky Human Rights Awards.