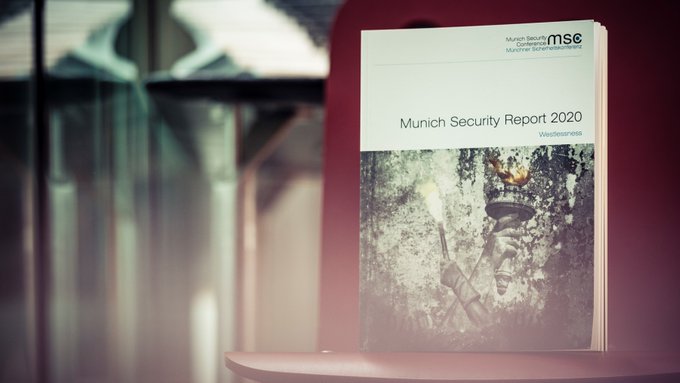 A revitalization of the West in the world must start at home. But, in contrast to autocratic regimes, liberal democracies have built-in mechanisms that allow for course corrections and democratic renewal. There may be bugs in the system, but it is not the system itself that is the bug, according to the 2020 Munich Security Report.

The “West” has never been a monolithic concept but rather an amalgam of different traditions,
the mix of which changed over time. Yet, for the past decades, the answer to the question what it was that kept the West together was straightforward: a commitment to liberal democracy and human rights, to a market-based economy, and to international cooperation in international institutions, the authors add:

Today, the meaning of the West is increasingly contested again. We are witnessing “the decay of ‘the West’ as a relatively cohesive geopolitical configuration anchoring a normative model of global order in which commitments to human rights, democracy, and the rule of law are central.”…..The contemporary “spiritual disunity of the West” is due to the rise of an illiberal and nationalist camp within the Western world. For this increasingly vocal group, the West is not primarily a community bound by liberal-democratic values and open to everyone sharing these values. Rather, it is a community held together by ethnic, cultural, or religious criteria.

Kicking off #MSC2020 and presenting the #MSCreport, @TobiasBunde (below) concluded with forward-looking and optimistic remarks on the resilience of Western norms and ideas.

The rise of populist nationalist parties is “not a threat to ‘democracy’ if democracy simply means majorities for certain policies,” Stanford’s Francis Fukuyama has observed. “It’s a threat more to the liberal order, which are protections through the rule of law, through constitutions that prevent abusive use of political power.”

“Liberals may rightly believe that the illiberal nationalists do not offer an appropriate solution for tackling the world’s most important problems,” the reports add, noting that populist slogans “are misleading, as they suggest to recreate a past that never was and promise what cannot be achieved. But illiberal populists have a clear message that resonates with many:

“Like it or not, global populism has a clear, marketable ideology, defined by toughness, nationalism, and nativism“: Defending the liberal international order or multilateralism, in contrast, makes for a much less convincing rallying cry for most people. It is defensive and creates the impression that it ignores real grievances. 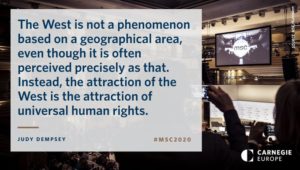 To maintain the West’s power of attraction, Western leaders need to defend those in the world struggling for universal human rights, @Carnegie_Europe’s @Judy_Dempsey writes in a curtain-raiser for #MSC2020.

Dealing with the implications of this new era will require cooperation with nondemocracies. Some of the world’s most important challenges (such as Climate Change) cannot be solved by the West alone. But Western countries would do well to treat the relations among liberal democracies as something special and worth preserving, the #MSC2020 authors add:

The cohesion of the West needs a convincing narrative that sets the community of liberal democracies apart from illiberal autocracies and could also be reflected in special institutional arrangements. This may take the form of a “non-monolithic form of international order: a thin network of global cooperation on certain key issues, a thicker ‘club model’ of economic integration among liberal democracies, and a set of national policies to support international openness.”If done smartly, this is possible without provoking a counter-alliance of non-democracies.

The West thus needs a “dual-track strategy” for the new era of great-power competition, cooperating with autocratic states where it is in its best interests but at the same time strengthening Western cohesion for an even more competitive environment, the report concludes. RTWT 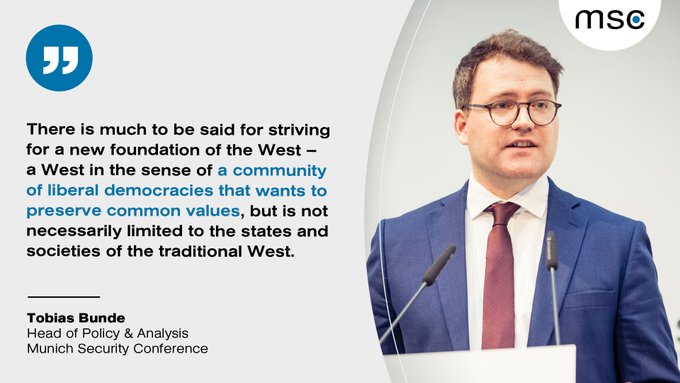