Unless something changes, the Middle East should brace for the worst of both worlds: a future without stability or freedom, the FT suggests.

Public support for U.S. military action and democracy promotion in the Middle East has all but collapsed, for two reasons, Walter Russell Mead writes for The Wall Street Journal:

Pundits can argue that these reactions are shortsighted, but politicians must take them into account, Mead adds.

American leaders have offered a range reasons for the great investment of blood and treasure in the region: to replace dictatorships with democracies, to enhance the rule of law, to support allied governments and to fight terrorism. But for some scholars of the region, the concrete benefits of all that engagement pale in comparison to the size of the American efforts, The New York Times reports.

“When you look at the cost-benefit analysis, there is a limited payoff, and the United States is going to reduce its footprint over time because there are so many other things to deal with in the world,” said Gary Sick, a Middle East scholar at Columbia University who served on the National Security Council under three presidents.

But others contend that U.S. pressure has pushed regional autocrats to take modest steps toward political openness, The Times adds.

“It can be significant for an American president to publicly criticize America’s autocratic allies and lend rhetorical support to those in the region struggling against oppression and for human rights,” said Amy Hawthorne, the deputy director of the Project on Middle East Democracy [a partner of the National Endowment for Democracy]. “Strong presidential rhetoric combined with strong presidential action behind the scenes can move the needle.”

Policy-makers should beware of “instrumentalizing Arab countries according to their usefulness” in dealing with the region’s challenges, say Carnegie analysts Michele Dunne (co-author of Arab Horizons) and Andrew Miller. “Such a perspective not only leads to mistaken policy calculations about what Arab leaders can actually do to help but also absolves them of responsibility for the region’s ills, ignoring the ways that poor governance, repression, and venality have created conditions in which instability and extremism thrive.”

They also question “strengthening the nation state” as an appropriate response to the 2009 Iran Green Movement and the Arab uprisings of 2011. The U.S. response to the Arab Spring was “tentative and excessively deferential to transitional leaderships, whose democratic bona fides were still highly uncertain,” they add. “Yet citizens in those uprisings were not asking for stronger (meaning, in this region, more coercive) states. Rather, they wanted the opposite—states that treat citizens with greater respect and respond to their needs.”

“One reason this is true is that, in its best moments, America uses its leverage to move its allies closer to its democratic ideals,” he writes. “Think of Ronald Reagan’s decision to push Filipino strong man Ferdinand Marcos aside after he tried to fix an election, or George W. Bush’s pressure on Mubarak to allow competitive parliamentary elections.”

Some observers believe “democratic ideals are a luxury U.S. statecraft cannot afford in the Middle East,” he adds. But dictatorships are never as stable as they appear from the outside.”

The desire to avoid being dragged into more Middle East ground wars will conflict with the need to support friends and allies and to push back against Russia and Iran, argues Elliott Abrams, a senior fellow for Middle Eastern studies at the Council on Foreign Relations, where he maintains a blog, Pressure Points.

The naïve assumption that U.S.-orchestrated military interventions would usher in new, democratic political systems was evident in Iraq, Libya and Syria, analyst Ted Galen Carpenter writes for The National Interest. But he mistakenly conflates regime change with democratization: Few, if any, democracy advocates believe that the former necessarily or readily translates into the arduous process of cultivating democratic institutions, habits and values.

Essentially, the U.S. has three major strategic options to consider in any review of its political-military posture in the region, argues Gary Anderson, an adjunct professor at the George Washington University’s Elliott School of International Affairs: 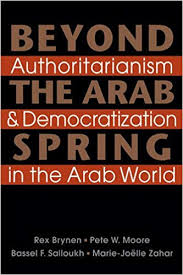 Martin Indyk, Robin Wright, and [Journal of Democracy contributor and co-author of The Arab Spring] Tarek Masoud join Fareed Zakaria (above) to assess the latest developments in the Middle East.