The U.S. says Nigeria’s upcoming national elections will be “a critical test of democracy” and expresses concern at reports of intimidation and partisanship.

The poll looks likely to be a close race between incumbent President Muhammadu Buhari of the All Progressives Congress (APC) and Atiku Abubakar of the People’s Democratic Party (PDP), Deutsche Welle reports.

Nigeria’s government and political parties must ensure electoral accountability and transparency in the upcoming election, according to Rep. Karen Bass (D-Calif. – right), the senior Democrat serving on the House Foreign Affairs Subcommittee on Africa.

“A credible, transparent and peaceful election this coming February would further consolidate democratic gains achieved over the last two decades,” said Representative Bass [a board member of the National Endowment for Democracy]. She today introduced a resolution with the Chairman of the House Foreign Affairs Committee Elliot L. Engel (D-New York) and the top Republican serving the Subcommittee on Africa Congressman Chris Smith (R-New Jersey).

The election is one of the Top 10 Global Risks of 2019, according to a recent Eurasia Group report:

Nigeria faces its most fiercely contested election since becoming a democracy in 1999. President Muhammadu Buhari lacks the energy and skill to meet Nigeria’s needs. His opponent, Atiku Abubakar, wants mainly to enrich himself and his allies. If Buhari wins, much-needed reforms must wait, and militant attacks on the oil industry will worsen. His failing health could add to political infighting. An opposition win could lead to more predatory and populist governance. There’s also a wildcard risk: An inconclusive election result could create chaos. 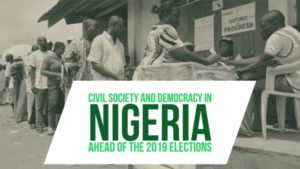 With no opinion polls published indicating clear support for any particular candidate, it’s difficult to accurately predict the outcome. Observers are already branding it one of the closest political races in the country’s history, DW adds:

Currently 25 candidates are set to take part. While Buhari and Abubakar are widely seen as the frontrunners, there are a number of interesting candidates in the mix. For example, chartered accountant and activist Oby Ezekwesili (above) – best known internationally as the founder of the #BringBackOurGirls campaign. Given that Nigeria is one of the worst countries in the world when it comes to female political representation, Ezekwesili’s decision to run with the Allied National Congress Party of Nigeria (ACPN) may be as a sign that things are slowly changing.