PEN International joined Danish, Finnish, Norwegian and Swedish PEN centres in expressing deep concern for the well-being of Sotoudeh, who was handed over 38 years in prison and 148 lashes for national security-related offences.

“We are deeply alarmed by the wrongful conviction of Sotoudeh,” it said. “We condemn the ruling not only as an egregious violation of rights of the lawyer in question, but also for the questions this sentencing raises about the judicial process itself.”

Amnesty International says (above) Sotoudeh’s case is part of an increasingly harsh crackdown on rights activists in Iran. The crackdown on dissenting voices in Iran is a direct violation of the principles of International Covenant on Civil and Political Rights, to which Iran is a state party, PEN adds.

Sotoudeh is known as a defender of rights of women detained for refusing mandatory covering of their hair in public. Arrested in June 2018 for defending women prosecuted for appearing in public without a headscarf, or hijab, she was charged with spreading propaganda against the state, insulting the country’s supreme leader and spying.

Democracies should use Global Magnitsky laws to issue targeted sanctions against these officials who are abusing human rights, argues Shaparak Shajarizadeh, a Senior Fellow at the Raoul Wallenberg Centre for Human Rights, and a former Iranian political prisoner and women’s rights leader who was freed by Sotoudeh. We can start with those involved in Nasrin’s unjust imprisonment, she writes for TIME:

But our most powerful tool is freedom, which remains out of reach for so many around the world, and especially for Nasrin, despite her dedicating her life to protecting it. We must use our freedom to help Nasrin secure hers. Whether on Twitter, Facebook, or Instagram, or in public protests and petitions, we must be her voice.

“How could I witness the execution of juveniles in my country and be silent? How could I close my eyes to child abuse cases … to be able to accompany you to school on the start of the new academic year along with your father? I just couldn’t, my son. That was my sin,” Sotoudeh wrote in a Letter to Her Children.

To add insult to injury, the United Nations on March 13 appointed Iran to a working group of the Commission on the Status of Women charged with promoting women’s rights and equality, the Wilson Center’s Haleh Esfandiari adds. Perhaps the UN thought this a fitting reward for the Islamic Republic’s glorious record in the defense of women who advocate for women and their rights. 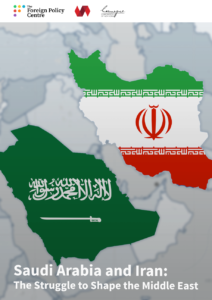 The other of the region’s two “distasteful theocracies” also came under attack for its human rights violations.

Saudi Arabia’s repression of political dissidents undermines “the future of the U.S.-Saudi relationship,” a bloc of Democratic senators warned the oil-rich monarchy, the Washington Examiner reports:

The lawmakers requested “the immediate and unconditional release” of several political prisoners, including one American citizen. They took a no-nonsense tone with the aging monarch, but identified specific steps he could take to defuse the tensions caused by Crown Prince Mohammed bin Salman’s aggressive foreign policy.

The lawmakers put special emphasis on the case of Walid Fitaihi, a U.S.-Saudi dual citizen who founded a hospital in Jeddah and hosted a popular TV show in the country. He was detained in 2017 alongside roughly 200 prominent Saudis, a group that included more than a dozen members of the royal family, at the Riyadh Ritz-Carlton. Fitaihi has been tortured in Saudi custody, the doctor’s son told lawmakers recently, and he has been permitted only very limited contact with his family.

“We will continue to closely watch Saudi action — or inaction — on human rights as Congress considers measures related to the Middle East,” Senate Minority Whip Dick Durbin, D-Ill., and eight colleagues wrote in a Tuesday letter to King Salman.

Dozens of Western countries recently rebuked Saudi Arabia for its aggressive crackdown on free expression – the first time states had ever confronted the kingdom over its human rights record in the United Nations Human Rights Council, where Saudi Arabia is one of 47 members, the Times reports:

The rebuke came in a statement signed by 36 nations — including every member of the European Union — that condemned Saudi Arabia’s “continuing arrests and arbitrary detentions of human rights defenders” and its use of counterterrorism laws to silence peaceful dissent. The statement pointed in particular to the treatment of Saudi women who have challenged the kingdom’s strict rules.