Tens of thousands of civilians took to the streets of Sudan today (above), mobilizing against a military coup that threatens to derail the country’s frail transition.

On Monday, the Sudanese military staged a violent coup, cutting off the nation’s internet access and taking the country’s civilian leaders into custody at an undisclosed location, a move that U.S. Special Envoy to the Horn of Africa Jeffrey Feltman said left the Biden administration “deeply alarmed,” the Daily Beast reports.

“It is a major blow to the democratic experiment in Sudan,” Cameron Hudson, a senior fellow at the Atlantic Council’s Africa Center and former White House Africa director, told VOA.

The fragmentation of state security forces may yet foil the military coup, analysts suggest.

The Sudanese Armed Forces (SAF) had historically been the dominant military and political force in the country, staging multiple coups, developing an arms industry, and enjoying close ties with Omar al-Bashir and his initial political ally, the Islamist Hassan al-Turabi, notes analyst Sharan Grewal. Bashir grew suspicious of Turabi, leading him to counterbalance the military by strengthening two other security forces, the National Intelligence and Security Services (NISS), the regime’s secret police, and the Rapid Support Forces (RSF), he writes in the latest issue of the Journal of Democracy.

It was still unclear whether the military, which is riven by divisions, was united behind the coup attempt, the Times adds. A senior Western official said that some Sudanese soldiers had stood between protesters and members of a powerful paramilitary group outside the military headquarters in Khartoum.

“It didn’t have to be this way. And I don’t think this is over by a long shot,” human rights advocate Kelley Currie tweeted (see below). “The Sudanese people have shown time and again that they do not accept military rule & they will push back against this usurpation. Next time, we need to make it clear we really are on their side.” 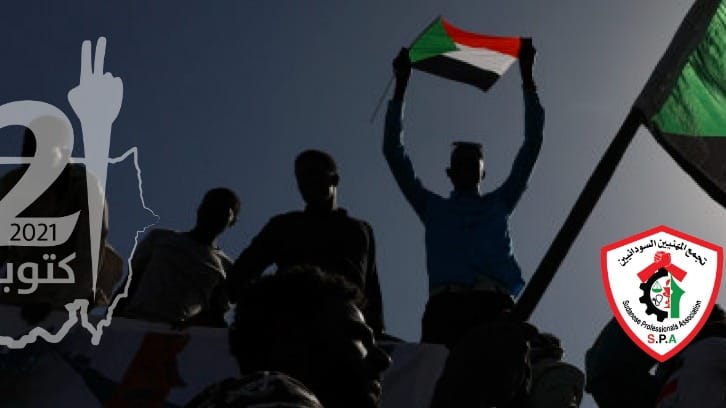 The Sudanese Professionals Association (above), an confederation of labor unions instrumental in organizing the pro-democracy protests, called on the public Monday to go out and occupy the streets to protect the transitional government, VOA adds.

The SPA said it would not give up. “The revolution is a revolution of the people,” the group posted on Facebook. “Power and wealth belongs to the people. No to a military coup.”

The African Union, the UN and the EU, as well as the Arab League and the US, expressed deep concern over Monday’s events. But the coup is not necessarily a “done deal”, says Africa analyst Alex de Waal, given Sudan’s “tremendous capacity for civic mobilisation“.

The military has tried to undermine that capacity by interfering with internet access, reports suggest. 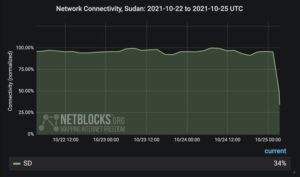 “This is what sets #Sudan  apart from earlier military coups, such as in Mali or Guinea,” Thomas van Linge tweeted. “The pro-democracy movement is strong here and anti-coup resistance is taking place from the very first hour.”

The timing of the coup attempt “coincided with the timeline of the civilians in the sovereignty council who were supposed to take the leadership of the council from the military council,” Sudanese political analyst Elsadig Elsheikh tells TRT World:

The Sovereign Council is a body established in mid-2019 amid Sudan’s turbulent revolution, replacing the country’s Transitional Military Council (TMC), the country’s ruling military junta at the time after Bashir’s ouster. The Sovereignty Council, which includes both civilian and military leaders, has powers including the prime minister’s appointment.

The country’s political frailty has a long precedent, the BBC adds. In previous decades the splintering of political parties and their inability to build consensus has time and again paved the way for the military to step in, mounting coups under the pretext of restoring order, regional analyst Magdi Abdelhadi writes.

Analysts have cautioned that Sudan’s democratic prospects were on shaky ground.

In this respect, the military’s intervention was a shock, but not a surprise.

The strength of the security forces continued to threaten the nascent democratization process ushered in by the popular uprising, analysts Mai Hassan and Ahmed Kodouda wrote for the Journal of Democracy.

The Forces for the Declaration of Freedom and Change (FFC) called for the release of all detained ministers and government officials and for the military to hand power over to a civilian government, AP adds.

Civil society groups critical to Sudan’s transition – the Regional Centre for Development and Training (RCDCS), the Nuba Women for Education and Development Association (NuWEDA), and the Darfur Bar Association (DBA) – were honored with the 2020 National Endowment for Democracy (NED) award (above), in recognition of “working tirelessly to strengthen civil society in Sudan.”

“Those in support of a military takeover will argue that this is a ‘correcting’ of the path of the revolution, but I think many who have had their hearts set on a transfer of power to a full civilian rule will see this definitely as a setback,” said Isma’il Kushkush, an independent journalist and former East Africa reporter at the New York Times. “I see this as a setback for the transition into a democracy,” Kushkush told VOA.

It didn’t have to be this way. And I don’t think this is over by a long shot. The Sudanese people have shown time and again that they do not accept military rule & they will push back against this usurpation. Next time, we need to make it clear we really are on their side, 1/ https://t.co/j3ywGnAwhV