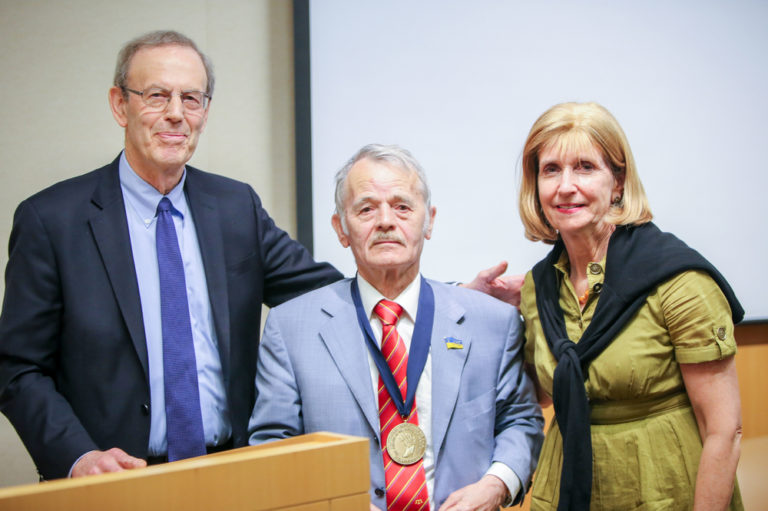 Two traumatic events, 70 years apart, frame the life and struggles of Mustafa Dzhemilev, according to National Endowment for Democracy President Carl Gershman. The first was Stalin’s forced deportation of the Crimean Tatars to Central Asia on May 18, 1944, a crime that uprooted and decimated an entire people.  The second was Putin’s annexation of Crimea on March 18, 2014, an act of aggression that once again subjected the Crimean Tatars to cruel repression and also dealt a lethal blow to the post-Cold War world order, added Gershman, (above left, with Paula Dobriansky, Senior Fellow at the Future of Diplomacy Project, Kennedy School, Harvard University, right),  presenting Dzhemilev with the democracy assistance group’s Democracy Service Medal:

Forced into exile once again, Mustafa has continued his struggle to end Russia’s illegal occupation and annexation of Crimea and to mobilize international condemnation of the massive human rights violations it has committed there, which include enforced disappearances, arbitrary arrests, torture, and at least one extra-judicial execution.

Throughout his unending struggle for justice, Mustafa Dzhemilev has never wavered in his determination to defend the rights of the Crimean Tatars.  As he said in the closing statement of his trial in 1983, “Fourteen years ago I vowed that nobody ever under any circumstances would make me renounce my duty…Today I can repeat these vows and hope that I would have enough spiritual strength not to change this principle to the end of my days.”