Governments, employers, and workers from around the world will meet beginning May 28, 2018, to discuss a proposed international treaty on violence and harassment in the workplace, Human Rights Watch said, as it issued a 16-page report outlining key issues in advance of the International Labour Organization (ILO) conference, scheduled through June 8, in Geneva:

The World Bank’s “Women, Business and the Law 2018” report found that 59 out of 189 countries whose economies were studied had no specific legal provisions covering sexual harassment in employment. More broadly, the ILO has noted that there are many gaps in legal protections relating to violence and harassment in the workplace. They include a lack of coherent laws, a lack of coverage in laws and policies for workers most exposed to violence, and an overly narrow definition of “workplace” in existing laws and regulations.

“The ‘Me Too’ movement has highlighted pervasive gender-based violence from the most well-known and powerful industries to the most marginalized and invisible sectors,” said Rothna Begum, Middle East women’s rights researcher at Human Rights Watch. “Countries can help set things right by adopting a global binding standard to prevent and respond to violence and harassment at work.” RTWT
Even as rich countries seek to rid workplaces of subtle gender bias, in many developing ones discrimination remains overt. According to the World Bank, women are barred from certain jobs in 104 countries (see map – below), the Economist adds:

Some countries publish lists of jobs deemed too dangerous for women (Russia’s 456 include driving a train or steering a ship). Others stop women from working in entire sectors, at night or in “morally inappropriate” jobs (in Kazakhstan women cannot bleed or stun cattle, pigs or small ruminants). In four countries women cannot register a business. In 18 a husband can stop his wife working.

The Solidarity Center’s two-minute “whiteboard” video walks you through different forms of gender-based violence at work and how workers are coming together to end it. Produced by the animation vendor who created the center’s award-winning freedom of association whiteboard video, the video appears in advance of the May 28–June 8 International Labor Conference.

Send the video to your networks. The Solidarity Center is a core affiliate of the National Endowment for Democracy. 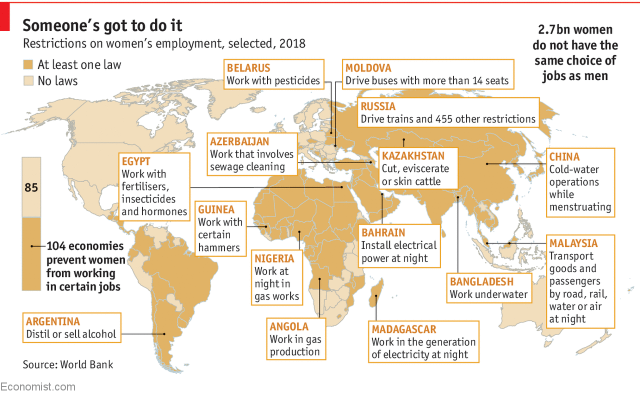