Since the Feb. 1, 2021, coup, the Tatmadaw, as the military is known, has responded to opposition with what the U.S. State Department has called “abhorrent violence,” shooting protesters, conducting airstrikes and attacking villages, NBC News reports. More than 1,500 people have been killed, according to the Assistance Association for Political Prisoners, a monitoring group based in Thailand.

The military’s ill-considered coup has triggered a revolution in Myanmar that could bring an end to one of the world’s longest military dictatorships and set the country on the path to a democratic future under elected civilian governance — but not before the country is left in tatters, according to a leading expert. 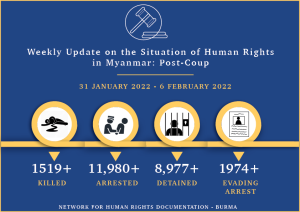 All hope is not lost for the role of the international community, says Priscilla Clapp,* a former chief of mission and permanent charge d’affaires at the U.S. Embassy in Burma (1999-2002). The opposition forces represent elected officials, civil society, majority and minority ethnic groups, and several important armed ethnic groups, she writes for The Hill:

Their leaders and negotiators are struggling to overcome the deep differences that have divided them in the past, in an effort to build unity around plans for a future diverse federal democracy. Under the pressure of sheer existential necessity, these nascent efforts at coalition building could mature over time into a more advanced consensus on federal governance and security.

Formulaic calls for a political settlement and an “inclusive” democracy are increasingly out of touch with what is happening on the ground inside the country, analyst Marvin Ott writes for the Wilson Center.

Given the various constraints and the need to remain adaptive in a highly volatile environment, the U.S. Agency for International Development and State Department should evaluate requirements and procedures to ensure adequate flexibility to support local civil society organizations (which know best how to deliver assistance in conflict areas) and to prioritize partner security, say the authors of the final report of the Myanmar Study Group, organized under the auspices of the United States Institute of Peace (USIP).

Possible outcomes to the current crisis are boundless and unpredictable, the USIP study adds, but include the emergence of an empowered opposition government conceived as an inclusive federal democracy with security forces reconfigured along federal lines, some early signs of which are already emerging in conflict areas where opposition forces and ethnic armed organizations (EAOs) are increasingly taking over local administration, health services, and security control.

The military’s crackdown on independent media has been accompanied by an increase in propaganda, with state media outlets harnessed to amplify the military’s voice and attack its enemies, notes Shreyas Reddy, East Asia Researcher with BBC Monitoring. 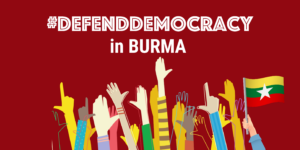 These restrictions have not deterred Myanmar’s pro-democracy movement, however, which has adopted alternative media formats to challenge the military and spread information, he writes for Chatham House. An early example was Towards, a newsletter which debuted on  March 30 and was soon followed by others such as the two-page daily Voice of Spring and Molotov, whose length and frequency would vary.

Dissident artists have produced dozens of illustrations highlighting the crisis in Myanmar, The Guardian reports: 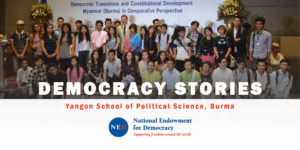 In her new article for @TheHill, one of the authors of the #MyanmarStudyGroup report, Priscilla Clapp, advocates for increasing the international community’s aid for Myanmar’s humanitarian crisis. Read more here:https://t.co/9lW5EMMs6e