The violent collapse of the Arab Spring has damaged the cause of liberal politics not just in the Middle East, but around the world. Strongman leaders are back in fashion from Moscow to Manila. Except for Tunisia, the FT’s Gideon Rachman writes:

Optimists hope that a democratic Tunisia could still, one day, serve as a role model for north Africa and the Middle East. The pessimists fear the process will run in the other direction, and that Tunisia could ultimately fall victim to the social and economic disorders that have destroyed democracy elsewhere in the region….Nahda leader Rachid Ghannouchi told me in Tunis last week that he rejects even the term “political Islam”. … Despite this, many secular Tunisians remain deeply suspicious of Nahda and fear that Mr Ghannouchi’s apparent moderation masks a more radical agenda. They point to the examples of Egypt and Turkey to suggest that Islamists will ultimately always seek to impose their values on the wider society.

In the US, the Trump administration now dismisses the promotion of democracy as naive and many Europeans would quietly agree, Rachman adds.

A leading member of the administration has even hinted that the United States has lost its historic “power of inspiration” as a model of democracy and tolerance, Robert F. Worth writes for the New York Times Magazine.

It’s clear from a video of Defense secretary James Mattis addressing a group of young American recruits in Jordan that his comments were not just a bland call for unity, Worth adds:

He was clearly suggesting that America had lost its historic “power of inspiration” as a model of democracy and social tolerance, and the context — with the country’s four military-service chiefs having just issued unequivocal condemnations of racial bigotry — gave his words added meaning.

Many observers are interpreting the appointment of John Bolton as President Trump’s National Security Adviser as confirmation that the administration has jettisoned democracy promotion, whether in the Arab world or beyond. In contrast to Republican neoconservatives, Bolton has little interest in exporting American values such as democracy and human rights, analysts Colum Lynch and Elias Groll write for Foreign Policy.

Unlike others who more proudly wear [the neo-conservative] label, Bolton is skeptical of democracy promotion in the Middle East, says one observer. Bolton has never been worked up about the democratization of other countries, notes Jacob Heilbrunn, editor of The National Interest:

When I saw him on the eve of the Iraq War at the State Department … he made it abundantly clear that he simply wanted to smash Iraq. He’s a regime-change kind of guy: go in. Take out the enemy. Then leave. Do it again if necessary. So what Trump’s moves seem to signal is the rise of conservative nationalism or, to put it another way, the Cheney doctrine on steroids.

Elliott Abrams, a senior foreign policy aide to former Republican President George W. Bush [and a board member of the National Endowment for Democracy], praised Trump’s choice, Reuters reports, saying Bolton “proved when we were both in the Bush administration that he is an excellent and forceful bureaucrat.”

Bolton is not, as David French wrote in National Review, “squarely in the mainstream of conservative foreign-policy thought,” Council on Foreign Relations analyst Max Boot writes for the Washington Post. Nor is he, as countless reporters have written, a “neocon,” insofar as he is hostile to democracy promotion.

The root of Bolton’s hostility to trends in multilateralism is his belief that these processes aim to restructure domestic governance (through human rights treaties and other instruments), with little direct democratic input, notes David Bosco, associate professor in Indiana University’s School of Global and International Studies. Bolton certainly is not alone in focusing on the accountability problems – the“democratic deficit” – in international governance, he writes for the Washington Post: 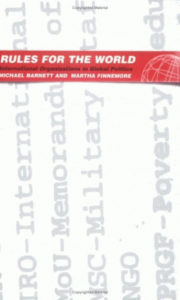 As Andrew Moravcsik has written, that deficit is “emerging as one of the central questions — perhaps the central question — in contemporary world politics.” In their influential book, “Rules for the World,” political scientists Martha Finnemore and Michael Barnett noted that international organizations “have never received high marks as exemplars of democratic decision making” and worried about the emergence of “undemocratic liberalism.”

No interest in democracy promotion

“Bolton is relentless, intelligent and effective,” said François Heisbourg of the International Institute for Strategic Studies, who as a French military analyst dealt with Mr. Bolton during the administration of George W. Bush. “But he’s not a neoconservative and has no interest in democracy promotion. He is a man of the Trumpian world — no allies, no multilateralism,” he told the New York Times.

While Bolton shares the neoconservative tendency to use military force as a tool of first resort, he doesn’t necessarily share their enthusiasm for democracy promotion, the Cato Institute’s Emma M. Ashford writes for the National Interest.

Because of his work in the Bush administration, many were quick to label Bolton a neoconservative, the faction that promoted regime change in Iraq in the name of democracy promotion. But that’s inaccurate, the New Republic’s Jeet Heer adds. Bolton isn’t really a neocon because he doesn’t seem to care about promoting democracy abroad; he just wants to use American power to advance American interests, including waging preventative wars, Vox’s Sean Illing contends.

But the new National Security Adviser’s opposition to nation-building and humanitarian interventionism has been borne out by events, analyst Caroline Glick contends:

As the so-called Arab Spring showed — and indeed, as Turkey’s democratic transformation into an Islamic theocracy also demonstrates — American values are not universal values at all. Supporting democratic processes with no concern about the values and culture those processes empower is unwise and irresponsible, and as the rise of Islamist regimes in Gaza, Egypt, Turkey, and beyond make clear, it is also antithetical to American national security interests.

As the 2017 National Security Strategy shows, Russia, China, and to a lesser extent Iran, are all countries that combine brutal governance at home with antipathy to the U.S.-led international order abroad. Accordingly, the U.S. now aims to lock arms with more benign autocracies (as well as democratic actors) that can help hold the line, notes Hal Brands , the Henry A. Kissinger Distinguished

Cooperation with benign authoritarian powers could lay the groundwork for the eventual promotion of human rights and democracy, adds Brands, author of American Grand Strategy in the Age of Trump:

In a broad sense, this belief reflected the undeniable truth that preventing malevolent authoritarians from dominating the international environment was a fundamental precondition to creating a world in which any type of liberty could flourish. More narrowly, maintaining close relations with problematic regimes provided the U.S. with leverage that it could sometimes use to foster liberalization over time.