Does Alexei Navalny embody the best chance for democratic change inside Russia since the crumbling of the USSR?

Just over a year ago, on 17 January 2021, Navalny was arrested upon returning to Russia. He had recovered from a poison attack on his life only to go straight to prison. Why? How? For what? The case frames modern-day Russia, EU Disinfo reports:

According to a public opinion poll conducted by Russia’s respected Levada institute in late September 2020, 30 per cent of Russians blamed Navalny’s attempted murder on “Putin, the Kremlin, the government” or some other Russian state body, whereas only 8 per cent said it was the West’s doing. Less than three months later, the 30 per cent group had dropped to 15 per cent while the 8 per cent group more than doubled to 18 per cent. Additionally, a whopping 30 per cent of respondents now believed the whole episode had been staged.

The same strategy was deployed to discredit Navalny’s latest anti-corruption investigation, the nearly two-hour long YouTube report (above) about Vladimir Putin’s “palace” – a lavish, secret seaside fortress-like structure, complete with an underground hockey rink, a night club with a stage for pole dancing, golden toilet brushes, and a number of other necessities which reportedly cost Russian taxpayers a couple of billion dollars, it adds. RTWT

He teams up with the Bulgarian journalist hacker Christo Grozev, a member of the open-source research group Bellingcat, who in scenes worthy of a “Bourne” thriller is able to suss out the identities of the men who tailed Navalny to Tomsk, all on different flights, as part of an FSB hit squad, Variety’s Owen Gleiberman writes:

Armed with this information, Navalny, who’s a master of media (his YouTube show has millions of followers and he has posted hundreds of TikTok videos, some with 50 million views, that document the corruption of the Russian state), arranges for the exposé of his poisoning to break at the same moment all over the globe on Dec. 14, 2020. That morning, he makes a call to each of the men responsible, pretending to be a Kremlin higher-up wanting to know why the assassination didn’t go as planned. RTWT 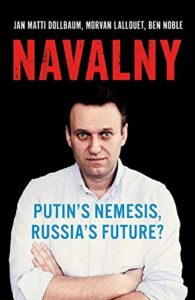 Navalny means very different things to different people, GWU adds. To some, he is a democratic hero. To others, he is a dangerous nationalist. A new book, Navalny: Putins Nemesis, Russias Future? by Jan Matti Dollbaum, Morvan Lallouet, Ben Noble, explores the many dimensions of Navalny’s political life, from his pioneering anti-corruption investigations to his ideas and leadership of a political movement.

Navalny has never fully disavowed his early radical views, though his platform these days is that of a mainstream, pro-European, social democrat, more left than right, The Guardian’s Luke Harding observes. The book explains Navalny’s forays into nationalism by quoting his view that an opposition needs to be popular. Only then can it be effective.

Was Navalny’s decision to face down Vladimir Putin an act of supreme courage, a modern-day echo of the doomed revolt by the Decembrists against autocratic rule? Or was it suicidal folly? After all, Navalny embodies the best chance for democratic change inside Russia since the crumbling of the USSR, he adds.

‘Navalny’ Review: A Must-See Documentary About the Anti-Putin Freedom Fighter Who Has Become the Conscience of Russia – features @NEDemocracy partner @bellingcat https://t.co/dmEWd4bMHo via @variety