Some 14 Cuban non-governmental organizations* have declared that a new “iron curtain of information” is descending that further censors access to the internet, and restricts the flow of information.

The regime is cracking down in Cuba on independent elements of civil society, the Center for  a Free Cuba reports:

Some of them, such as SNET, the largest private network in the country, were not political but have been taken over by the dictatorship. Other tactics, such as expanding restrictions on who can travel, are targeting those who are political dissidents, independent journalists or other members of independent civil society.

This has generated protests among previously apolitical gamers, and driven Guillermo del Sol Pérez, a religious activist and independent journalist to initiate a hunger strike to protest the over 130 Cubans arbitrarily banned from traveling outside the island.

The human rights situation in Cuba remains abysmal, notes Daniel I. Pedreira, the author of “An Instrument of Peace: The Full-Circled Life of Ambassador Guillermo Belt Ramírez.”

The Cuban Commission of Human Rights and National Reconciliation (CCDHRN), an independent NGO based in Havana, reported 639 arbitrary detentions by Cuban authorities during the first three months of 2019 alone, he writes for UPI. PEN International issued a report and several statements on Decree 349, a Cuban law that restricts artistic expression that came into effect in December 2018, calling it “the most significant attempt by officials to regulate the cultural sector and control a rising generation of independent and globally connected artists.”

Any new approach to Cuba must rely on historical realism, he suggests.

A prominent advocate of human rights and democracy for Cuba has been awarded the prestigious Heintz Memorial Award for Humanitarian Achievement by a gathering of the world’s leading international lawyers.

Described as “a Champion of Human Rights” by those in attendance, Raoul Wallenberg Centre for Human Rights  Chair Irwin Cotler (right) joined past recipients, including Nuremberg Trials Prosecutor Benjamin Ferencz, human rights campaigner Sergei Magnitsky, and United Nations High Commissioner for Human Rights Zeid Ra’ad al-Hussein, among other luminaries. Presented at the International Humanitarian Law Dialogues, the event was organized in partnership with the Robert H. Jackson Center, named after the U.S. Supreme Court Justice who served as Chief Prosecutor at the Nuremberg Trials of Nazi War Criminals. 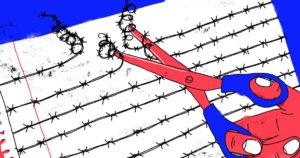 Cotler has condemned the presence of Cuba and similar repressive regimes on the UN Human Rights Council.

“Regrettably, when the UN itself ends up electing human rights violators to the Human Rights Council, it indulges the very of culture of impunity it is supposed to combat,” former Canadian justice minister Cotler said.